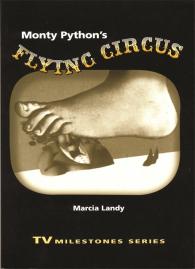 This is a highly valuable contribution to the television studies library as well as a must read for all Python fans.

One of the most innovative comedic programs to air on television, Monty Python’s Flying Circus was a mix of the carnivalesque and the critical. The show has become famous for eschewing many of the conventions of situation comedy, the fully formed and coherent script, narrative closure, predictable characters, and the decorum associated with presentation. Its curious transatlantic popularity defied the assumption that comedy is regional and exclusive, and the show’s cult status still lives on in the United States and United Kingdom through reruns, videos, DVDs, and continual reappearances by the show’s now iconic stars. Most written accounts of Monty Python’s Flying Circus focus solely on members of the Pythons, histories of the sketches, or the development of other Monty Python projects, leaving a dearth of scholarly and contextual analysis on the television show itself.

Marcia Landy’s book is one of the rare studies available examining the Flying Circus within the context of its time, analyzing the show’s influence on 1960s and 1970s British television as well as British cultural influence on the show’s legendary material. Landy explores not only why the series’ complex form of comedy was important but also why it was so well received, citing the Pythons’ amalgam of comedic material: the unruly treatment of sexuality, the mockery of religion and class, and the critique of the medium of television. The Flying Circus parodied both the lowbrow and the highbrow, throwing many previously untouchable topics into the ring, and here Landy deconstructs the impact of the show’s risks and reception. As informative as it is engaging and entertaining, this book will appeal to film and media scholars, popular culture enthusiasts, and Monty Python fans alike.

Marcia Landy is Distinguished Service Professor of English and Film Studies at the University of Pittsburgh. She is author and editor of many books, most recently author of Italian Film (Cambridge, 2000) and co-editor of The Historical Film: History and Memory in Media (Rutgers University Press, 2001). She is also editor of Imitations of Life: A Reader on Film and Television Melodrama (Wayne State University Press, 1991).

And now for something completely different: a highly readable, thoroughly researched, critically sophisticated look at one of television's most influential comic troupes. Landy situates their innovative sketches in historical and theoretical contexts [while] at the same time bringing a smile to one's face in fond remembrance of the Pythons' inspired comic madness. The book is a must read for those interested in comic theory, British culture, and television studies."

In this highly readable new study of a genuine television milestone, Marcia Landy again demonstrates her credentials as an astute and original critic of popular culture. Landy pulls off the most difficult of critical tasks: to make sense of the absurd. Analyzing the Python phenomenon from the perspectives of cultural history and critical theory, Landy sees the program both as an artifact of the sixties cultural revolution and as part of a lineage of British surrealist humor. It is in the sure-footed and perceptive analysis of such classic sketches as 'The Dead Parrot' and 'The Wacky Queen' that Landy comes into her own, demonstrating how Monty Python tested and transgressed the boundaries of respectability and taste. Informed, illuminating and above all accessible, this is a highly valuable contribution to the television studies library as well as a must read for all Python fans."

– James Chapman, The Open University (UK), author of Licence To Thrill: A Cultural History of the James Bond Films and Saints and Avengers: British Adventure Series of the 1960s

5 hours 30 min ago
Happy Pub Date! HOUSE AND HOME is a collection of poems that intensely explore the beauty & wisdom to be found in w… https://t.co/MYnkKJxcrx
2 days 7 hours ago
Join WSU President M. Roy Wilson for a book talk next Wednesday! Copies of his memoir will be available for sale a… https://t.co/6q5w5dtFtu
4 days 7 hours ago
TONIGHT! Join @stephanie_heit at @ShopBooksweet for local author's night! https://t.co/pTny5OErDe