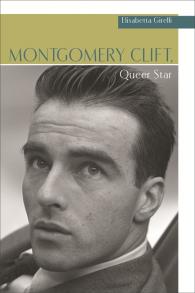 From the sexually ambivalent "beautiful boy" of his early films, to the seemingly asexual, transgressive, and often distressed man of his last years, Girelli argues that Clift shows remarkable consistency as a star: his presence always challenges established notions of virility, sexuality, and bodily "normality." Girelli's groundbreaking analysis uses queer theory to assess Clift's disruptive legacy, engaging with key critical concepts such as the closet, performativity, queer shame, crip theory, and queer temporality. She balances theoretical frameworks with extensive close readings of his performances and a consideration of how Clift's personal life, and public perceptions of it, informed his overall image as a deviant star and man.

Montgomery Clift, Queer Star offers a comprehensive critical assessment of Clift through classic texts of queer criticism, as well as new interventions in the field. Scholars of gender and film, performance studies, queer and sexuality studies, and masculinity studies will appreciate this compelling study.

Elisabetta Girelli is a lecturer in film studies at the University of St. Andrews. She is the author of Beauty and the Beast: Italianness in British Cinema and of several scholarly articles on issues of identity, space, and history in film.

Girelli does a heroically astute job of offering detailed analyses of Clift’s post-accident films. . . She points out that "a new queerness" awaits discovery in these later films, and indeed her analysis leads one to seek them out anew. . . Love, in all of its myriad forms, is in the air throughout this complexly conceived, thoroughly engaging, and provocative book.

Elisabetta Girelli has written an elegant, illuminating book on one of Hollywood's most iconic male stars. Her sharp, thoroughly researched and theoretically informed analysis of Clift's enigmatic persona delivers fresh insights into the full range of his films. Eroticised and pained in early roles and, in later ones, more conflicted and alienated, Clift's ambiguous screen presence is persuasively read as a challenge to dominant contemporary norms and ideals of selfhood.

This eloquently written volume was often difficult for me to put down; I found it very engaging. It has clarity, precision, and focus, building well on work that has come before. It is destined to become the definitive scholarly work on Montgomery Clift.

– Christina Lane, associate professor of film studies at the University of Miami