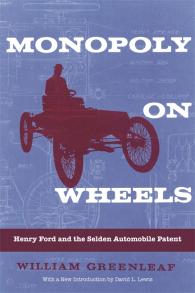 William Greenleaf
With a New Introduction by David L. Lewis

No piece of patent litigation has greater suspense or more histrionic elements. At first the odds seemed so heavily against Ford that we follow the successive steps anxiously. Mr. Greenleaf, thorough in research, vigorous in style, has given us the definitive treatment of a significant and previously cloudy episode.

In 1895, visionary Rochester, New York, attorney George B. Selden was granted a patent for a "road-carriage" that he had designed but not built. In anticipation of a burgeoning American auto industry, Selden had filed a series of amendments to his application, delaying the process for sixteen years in order to stretch his claim out as long as possible. As a result, the Selden patent covered all gasoline-powered vehicles designed since 1879 and manufactured, sold, or used in the United States during a seventeen-year period ending in 1912. Selden's ally, the Association of Licensed Automobile Manufacturers, granted licenses and collected royalties on cars made by other manufacturers until 1903, when the patent was challenged by a coalition of automakers led by Henry Ford.

In this classic study of the Selden patent case, author William Greenleaf argues that Ford's defiance of the patent was considered heroic and that his victory in court after a contentious eight-year trade war was historic. Based on Greenleaf's extensive research in the Ford corporate archives, Monopoly on Wheels shows that the real issue at stake in the Selden patent case was the democratization of the automobile as a mass-produced, low-priced commodity as opposed to its former status as the exclusive property of the wealthy elite. Greenleaf shows that the suit was a foundation stone, along with the Model T, mass production methods, and the five-dollar day, upon which Ford's reputation as a rugged individualist was built. Greenleaf also investigates implications that the legal battle had beyond the auto industry for inventions, patents, and technological progress in general.

Monopoly on Wheels vividly illustrates how the Selden patent battle became a landmark in the social and technological revolution of the early twentieth century. On the one-hundredth anniversary of the Selden patent case and fifty years after it was first published, this volume will be a welcome addition to any auto historian's library. This reprinted edition also includes a new introduction by David L. Lewis.

William Greenleaf was professor of history at the University of New Hampshire until his death in 1975. From 1952 to 1955, he was a research associate of the Ford Motor Company History Project sponsored by Columbia University and worked with Allan Nevins and Frank Ernest Hill on their monumental history of the Ford Motor Company, Ford: The Times, the Man, the Company. Greenleaf is also the author of several other books of industrial and business history.

Kudos to Wayne State University Press for reprinting William Greenleaf's definitive book on the Selden patent suit, which a century ago liberated the auto industry and became a foundation stone upon which Henry Ford's folk heroism was built. Ford later said (and James Couzens, the company's secretary, and Hawkins agreed) that no one factor publicized the company and its products as effectively as the Selden suit."

– David L. Lewis, from the Introduction

No piece of patent litigation has greater suspense or more histrionic elements. At first the odds seemed so heavily against Ford that we follow the successive steps anxiously. Mr. Greenleaf, thorough in research, vigorous in style, has given us the definitive treatment of a significant and previously cloudy episode."

– Allan Nevins, from the Foreword

Fortunately, Wayne State University Press has now stepped in and reissued Greenleaf's book as an inexpensive paperback (it has done the same for other unobtainable works, including Charles Sorensen's My Forty Years with Ford). Accessible, intelligent, and rich in detail-if occasionally unabashed in its praise for Mr. Ford-Monopoly on Wheels remains the definitive text on the Selden suit. Only now, you won't have to eat instant noodles for a year to afford a copy.

17 hours 12 min ago
Hey #movementdetroit fans! WSUPress's TECHNO REBELS is a great way to relive the excitement of @MovementDetroit all… https://t.co/f4nPn8uYj0
1 day 17 hours ago
Check out Cindy Hunter Morgan's new book at https://t.co/o1mzeoKv1M https://t.co/6W9FLg0RLa
2 days 20 hours ago
Wayne State University President M. Roy Wilson with his teacher in high school. Check out this image and many more… https://t.co/W3kp1D7dFX