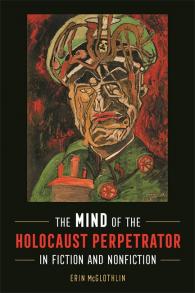 The Mind of the Holocaust Perpetrator in Fiction and Nonfiction

The Mind of the Holocaust Perpetrator in Fiction and Nonfiction examines texts that portray the inner experience of Holocaust perpetrators and thus transform them from archetypes of evil into complex psychological and moral subjects. Employing relevant methodological tools of narrative theory, Erin McGlothlin analyzes these unsettling depictions, which manifest a certain tension regarding the ethics of representation and identification. Such works, she asserts, endeavor to make transparent the mindset of their violent subjects, yet at the same time they also invariably contrive to obfuscate in part its disquieting character.

The Mind of the Holocaust Perpetrator in Fiction and Nonfiction contains two parts. The first focuses on portraits of real-life perpetrators in nonfictional interviews and analyses from the 1960s and 1970s. These works provide a nuanced perspective on the mentality of the people who implemented the Holocaust via the interventional role of the interviewer or interpreter in the perpetrators’ performances of self-disclosure. In part two, McGlothlin investigates more recent fictional texts that imagine the perspective of their invented perpetrator-narrators. Such works draw readers directly into the perpetrator’s experience and at the same time impede their access to the perpetrator’s consciousness by retarding their affective connection. Demonstrating that recent fiction featuring perpetrators as narrators employs strategies derived from earlier nonfictional portrayals, McGlothlin establishes not only a historical connection between these two groups of texts, whereby nonfictional engagement with real-life perpetrators gradually gives way to fictional exploration, but also a structural and aesthetic one.

The book bespeaks new modes of engagement with ethically fraught questions raised by our increasing willingness to consider the events of the Holocaust from the perspective of the perpetrator. Students, scholars, and readers of Holocaust studies and literary criticism will appreciate this closer look at a historically taboo topic.

Erin McGlothlin is professor of German and Jewish studies at Washington University in St. Louis. She is the author of Second-Generation Holocaust Literature: Legacies of Survival and Perpetration and coeditor with Brad Prager and Markus Zisselsberger of The Construction of Testimony: Claude Lanzmann’s Shoah and Its Outtakes (Wayne State University Press, 2020).

Erin McGlothlin’s extraordinary study not only offers sharply insightful readings of journalistic accounts and novels that seek to depict the inner lives of Nazi perpetrators but also presents a most compelling methodology for analyzing such depictions of the perpetrator in works of literary fiction, investigative journalism, and other textual modes. This wonderfully lucid, fiercely intelligent, and beautifully written book is must-reading for anyone studying the representation of the Holocaust or engaging with efforts to understand and portray the mindsets of perpetrators of historical atrocities.

– Gary Weissman, author of Fantasies of Witnessing: Postwar Efforts to Experience the Holocaust

In this extremely innovative and important study, McGlothlin poses crucial new questions about the ways in which fiction and nonfiction texts depict the inner worlds of Holocaust perpetrators. Her careful analysis reveals how these texts give us the impression of ‘reading the minds’ of agents of extreme violence, while at the same time narrative filtering strategies establish a crucial distance, to prompt our ethical reflection on the Holocaust’s legacy.

McGlothlin offers sophisticated, nuanced, and cogent interventions into scholarly conversations about (a) how to come to terms with the Holocaust; (b) narrative ethics, empathy, identification, and mind-reading; and (c) the relations between fiction and nonfiction. A must-read for anyone involved—or at all interested—in these vital conversations.

– James Phelan, coeditor of After Testimony: The Ethics and Aesthetics of Holocaust Narrative for the Future

In this much-anticipated work, McGlothlin draws on her considerable knowledge of narrative theory to offer the most substantial and sustained exploration of the literature of perpetration in English to date. Expertly bringing together fictional and nonfictional representations of Nazi perpetrators, McGlothlin takes us through an ethical minefield with nuance and sensitivity. The careful work of reading undertaken here is itself a strong argument for the value of literary studies in confronting some of the most significant and troubling areas of human history and culture.

– Michael Rothberg, author of The Implicated Subject: Beyond Victims and Perpetrators

Erin McGlothlin’s book is a rigorous and insightful study of the complex dynamics of representing the mind of the Holocaust perpetrator in both fiction and nonfiction. It displays a rare combination of a sense of history and a talent for nuanced narrative analysis.

McGlothlin’s analyses of both the primary and the secondary literature are refreshingly
candid, as are explications of her own work and interest in the subject
of Holocaust studies. This is bold scholarship.