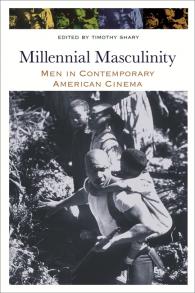 From matters of performance to genre, from violence to ‘bromance,’ from ‘fat studies’ to class, and from race and sexual identity to patriarchy’s cultural reach, Millenial Masculinity offers important analyses for film and masculinity studies.

In virtually every aspect of culture-health, marriage, family, morals, politics, sex, race, economics-American men of the past two decades have faced changing social conditions and confronted radical questions about themselves. In Millennial Masculinity: Men in Contemporary American Cinema, editor Timothy Shary collects fourteen contributions that consider male representation in films made at the turn of the century to explore precisely how those questions have been dealt with in cinema. Contributors move beyond the recent wave of "masculinity in crisis" arguments to provide sophisticated and often surprising insight into accessible films.

Chapters are arranged in four sections: "Performing Masculinity" includes a discussion of Adam Sandler and movies such as Milk; "Patriarchal Problems" looks at issues of fathers from directors such as Martin Scorsese, Wes Anderson, and David Fincher; "Exceptional Sexualities" examines male love and sex through movies like Brokeback Mountain and Wedding Crashers; and "Facing Race" explores masculinity through race in film. Sean Penn, Jackie Chan, Brad Pitt, Will Smith, and Philip Seymour Hoffman are some of the actors included in these analyses, while themes considered include police thrillers, psychotic killers, gay tensions, fashion sense, and the burgeoning "bromance" genre.

Taken together, the essays in Millennial Masculinity shed light on the high stakes of masculine roles in contemporary American cinema. Film and television scholars as well as readers interested in gender and sexuality in film will appreciate this timely collection.

Timothy Shary has taught at the University of Massachusetts, Clark University, and the University of Oklahoma. He is the author of Generation Multiplex: The Image of Youth in Contemporary American Cinema and Teen Movies: American Youth on Screen and co-editor with Alexandra Seibel of Youth Culture in Global Cinema. His research on the representational politics of age and gender has been published in many anthologies, including Virgin Territory: Representing Sexual Inexperience in Film (Wayne State University Press, 2010), and his essays and reviews have also been widely published.

How do we see affective, political, and sexualized masculinity in recent film? What is at stake in these particularly American representations? Timothy Shary brings together a group of writers who thoughtfully, provocatively, and cogently address these questions. From matters of performance to genre, from violence to 'bromance,' from 'fat studies' to class, and from race and sexual identity to patriarchy's cultural reach, Millennial Masculinity offers important analyses for film and masculinity studies.

A book for its time in more ways than one, Millennial Masculinity presents the state of the art in feminist-masculinity film criticism. This is a compendium of varied, incisive viewpoints on what made a man, according to American movies, as the twenty-first century began. Here is a valuable addition to stand alongside Wayne State Press's definitive film studies anthologies.

This anthology is a welcomed and incredibly well-edited and researched addition to the area of masculinity studies that indicates that masculinity is but one term imbricated with other markers of identity such as age, sexuality, class, race, and nationalism.

A successful film anthology hinges upon three characteristics: strong editing, a sharp focus, and articles that substantially contribute to the field. One of the strongest volumes on contemporary cinematic masculinity in years, this anthology compiled by Shary (Clark Univ.) has all three qualities. The collection includes articles on familiar and popular films (Brokeback Mountain, Fight Club), but also unexpected subjects such as Philip Seymour Hoffman, Adam Sandler, and neo-retro heist films. There is not a trivial article in the book. . . . Helpful supplemental materials include a list of US films since 1990 that address masculinity, and an exhaustive bibliography. Summing Up: Highly recommended.

The comprehensive themes of cinema, and its dependence on audience appeal to achieve success, make movies the ideal medium through which we can better understand how men in contemporary culture have been changing.