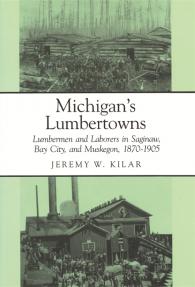 Michigan's foremost lumbertowns, flourishing urban industrial centers in the late 19th century, faced economic calamity with the depletion of timber supplies by the end of the century. Turning to their own resources and reflecting individual cultural identities, Saginaw, Bay City, and Muskegon developed dissimilar strategies to sustain their urban industrial status. This study is a comprehensive history of these lumbertowns from their inception as frontier settlements to their emergence as reshaped industrial centers.

Primarily an examination of the role of the entrepreneur in urban economic development, Michigan Lumbertowns considers the extent to which the entrepreneurial approach was influenced by each city's cultural-ethnic construct and its social history. More than a narrative history, it is a study of violence, business, and social change.

Jeremy W. Kilar is profesor of American history at Delta College, University City, Michigan. He received his Ph.D. from the University of Michigan. With Bradley F. Smith, he is the co-author of Tobico Marsh.

A thorough and well-reasoned exploration of the history, evolution, and development of three mid-sized Michigan industrial cities through the medium of the logging industry. The work is important in relating the historical development of typical Michigan cities to the functioning of the state's economy during the late nineteenth century and afterward.