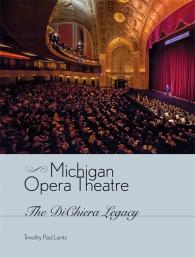 In the spring of 2017 David DiChiera’s nearly fifty-five year tenure as the guiding spirit of opera in southeast Michigan came to an end with his retirement from Michigan Opera Theatre. The Impresario and civic leader extraordinaire was stepping aside, and the company he founded was in excellent shape with a bright and sustainable future and a beautiful world-class home in the Detroit Opera House. It was the end of the first great era of Michigan Opera Theatre’s history and the time is ripe to get the story into print for posterity. Michigan Opera Theatre: The DiChiera Legacy is an informative and accessible look at the first era of this regional opera company.

David DiChiera, the founder of MOT, arrived at the right time in a community that was fertile ground and a convergence took place, one that precipitated the building of a major cultural institution and made a major contribution to the renaissance of a city. It was a labor of love, and it was combined with an intense, full-time, every-single-day kind of effort that would inspire the forces around him to coalesce into Michigan Opera Theatre.

In the first era of this opera company the names David DiChiera and Michigan Opera Theatre are completely intertwined, essentially synonymous. He arrived in southeast Michigan in the fall of 1962 as an assistant professor of music at Oakland University because he saw the opportunity to build programs. DiChiera saw a chance to develop something local that belonged to the region. Reflecting back, in 1982, he was quoted: "Detroit was the fifth largest city in the nation and the only major city without an opera company. I couldn’t accept that fact; I knew the constituency for it was here."

The opera company as we know it today had its inception in the fall of 1971 with the company’s move into the Music Hall Theatre. This move was the spark that ignited the rebirth of Detroit’s now magnificent theatre and entertainment district. David DiChiera and his young company were the first to commit to downtown and reinvest in a district that had seen many years of decline. It was a civic contribution of the highest order. He has been the heartbeat of the company for nearly fifty-five years, and it has been a triumph of and for regional opera as well as for the city of Detroit.

Timothy Paul Lentz is the archivist and historian at the Michigan Opera Theatre. He is also director of the Dance and Opera Resource Library and Michigan Opera Theater Archive at the Detroit Opera House. He has been involved with archiving and chronicling the history of the opera company since 1991. His essay "The History of Michigan Opera Theatre", which was included in the David DiChiera 2013 Eminent Artist monograph, was awarded a first place for feature writing by the Society of Professional Journalists/Detroit Chapter.

In this premier work on Detroit's Michigan Opera Theatre, author Timothy Paul Lentz reveals one man's quest to build an opera for Detroit's citizens. Michigan Opera Theatre: The DiChiera Legacy includes an in-depth look at the opera's history - including both its earliest beginnings and more recent endeavors as a cultural organization. In particluar, Lentz details the entwining history of David DiChiera's personal endeavors with the opera, and its subsequent success as a result of his efforts. For readers interested in operatic history, Lentz's work is sure to solidify Detroit's place in American's opera legacy.

This beautifully illustrated book is divided into three main parts and takes the reader through the story of David DiChiera and the history of the Michigan Opera Theatre, the refurbishment and reconstruction of the Detroit Opera House, and a listing of operas performed with an impressive gallery of photos. For anyone interested in opera, theatre, or Detroit cultural history, this will be a welcome library addition.