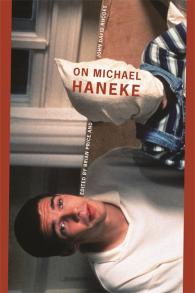 A valuable addition to the growing canon of writing on Haneke, this volume should appeal to both students and scholars in cinema/television studies and critical theory more broadly.

Austrian director Michael Haneke is recognized for films that explore the most pressing social questions of our time while simultaneously pushing the boundaries of style with innovative visual and sonic practices. On Michael Haneke is one of the very first and most extensive considerations of Haneke’s work. Editors Brian Price and John David Rhodes have gathered contributors whose own work combines critical inquiry and close formal analysis to explore the philosophical, historical, and stylistic complexity of Haneke’s films.

This volume is divided into three parts, beginning with "Violence and Play," in which contributors explore the relation in Haneke’s films between violence and playfulness that complicates questions of media, representation, and morality. Essays in part 2, "Style and Medium," investigate Haneke’s stylistic innovation and the ways in which he can be seen as indebted to previous traditions and filmmakers, including the Italian neorealists, Alfred Hitchcock, Antonioni, and Robert Bresson. Part 3 addresses questions of "Culture and Conflict" by looking at the cultural and historical problems suggested by Haneke’s films and exploring the relation between culture and film style.

On Michael Haneke is both an introduction to the work of a major figure in world cinema and a model for modern media criticism. Scholars of film and television studies, cinephiles, and anyone interested in contemporary film culture will enjoy On Michael Haneke.

Brian Price is assistant professor of screen studies at Oklahoma State University and author of Neither God Nor Master: Robert Bresson and the Modalities of Revolt and co-editor of Color, the Film Reader.

John David Rhodes is senior lecturer in literature and visual culture at the University of Sussex and author of Stupendous, Miserable City: Pasolini’s Rome and co-editor of The Place of the Moving Image. Price and Rhodes are both founding co-editors of the journal World Picture.

Michael Haneke is one of the most distinct-and distinctly controversial-directors at work today. On Michael Haneke responds to that controversy by asking an impressive range of contributors to think critically about the art of his cinema and its challenge to some of the impasses in contemporary studies in film. Impeccably-and creatively-edited, this volume is an invaluable addition both to the growing literature on Haneke's work and, crucially, to the ongoing discussion of the experience of the audiovisual field at the beginning of the twenty-first century."

– Vicky Lebeau, professor of English at the University of Sussex

On Michael Haneke is a compelling and timely collection of essays in which film theory and history are interwoven. I am especially impressed with what is made of Haneke's animal and human worlds; of his embrace of the long take; of his features that exploit the gaze in eerily unsettling ways; of his reflections on history as it is at once occluded and recalled. Written elegantly and with care, the essays address different-but always interrelated-facets of his cinema. This book is a first of its kind."

…The quality and scope of analysis undertaken within this collection is impressive. A valuable addition to the growing canon of writing on Haneke, this volume should appeal to both students and scholars in cinema/television studies and critical theory more broadly."

– Josh Nelson, Screening the Past

Michael Haneke is one of the most important film directors working today. This collection offers a full spectrum of responses to his work, ranging from detailed formal analyses of his films to broad considerations of the philosophical and political issues that these films raise. On Michael Haneke is indispensable, both as a guide to the filmmaker's artistry and as a commentary on the malaise in Western civilization that his films reveal."