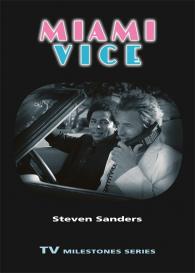 Written with both the enthusiasm of the fan and the perspicacity of the scholar, this book is accessible and yet never simplistic, a fitting tribute to Miami Vice itself, which was always entertaining yet thought-provoking.

There may be no more iconic image of mid-1980s network television than Sonny Crockett and Ricardo Tubbs speeding down Biscayne Boulevard in Crockett’s sleek black Ferrari on Miami Vice. With its unprecedented $1.3 million-per-episode budget and executive producer Michael Mann at the helm, Miami Vice brought feature film production values to prime time and redefined the television police drama. In Miami Vice author Steven Sanders argues that the show’s themes, narratives, visual realization, and sound design created a new standard of crime television that has its roots in classic film noir and neo-noir.

In chapter 1 Sanders describes the social, political, and cultural background that led Anthony Yerkovich, creator of Miami Vice, and Mann to use Miami and its beaches not merely as a backdrop but as a character in its own right. Along with the show’s visual aspects, Sanders identifies themes of ambiguity, alienation, personal identity, and irony that came to define the distinctive "TV noir" style of Miami Vice. In chapter 2, Sanders discusses four key episodes to examine the existentialist and postmodern themes that can be found in their story lines and visual style. In chapter 3, Sanders considers questions of authenticity, redemption, and politics in Miami Vice, with reference to episodes that demonstrate the show’s attention to the political corruption and intrigue surrounding the war on drugs. In the final chapter, Sanders offers a novel explanation of why Miami Vice matters to film and video scholars.

Miami Vice’s visual and musical appeal, cultural resonance, and topicality made it absorbing entertainment in its own day; Sanders proves that its exploration of social, moral, political, and philosophical issues make it worth watching twenty-five years later. Fans of the show and scholars of television history and American popular culture will appreciate this illuminating look at Miami Vice.

Steven Sanders is emeritus professor of philosophy at the Massachusetts State College at Bridgewater. He is the editor of The Philosophy of Science Fiction Film and a contributor to Film Noir: The Encyclopedia and Blackwell’s Companion to Film Noir.

While sometimes derided as superficial by inattentive critics, the truth is that Miami Vice offered visually groundbreaking and philosophically rich crime drama that reflects the legacy of film noir and has been tremendously influential on subsequent television. No one sees that more clearly than Steven Sanders, and no one who reads Sanders's thorough and insightful discussion of this landmark series will ever look at it the same way again."

– Aeon Skoble, co-editor of The Philosophy of TV Noir (with Steven Sanders)<br /><br />

In this slim volume, Steven Sanders offers a penetrating and surprisingly comprehensive examination of the artistic and thematic complexities of one of network television's most popular and critically acclaimed series. Written with both the enthusiasm of the fan and the perspicacity of the scholar, this book is accessible and yet never simplistic, a fitting tribute to Miami Vice itself, which was always entertaining yet thought-provoking. Sanders is especially to be praised for his thorough and careful analysis of production history, which provides a mine of useful information. His graceful, fluent prose is a joy to read."