Home » Books » Members of the Tribe 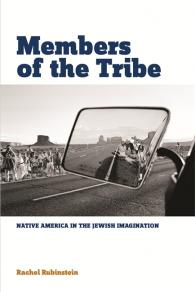 Members of the Tribe

Native America in the Jewish Imagination

This remarkable book is a must-read for those interested in transethnic criticism and the Jewish encounter with modernity.

In Members of the Tribe: Native America in the Jewish Imagination, author Rachel Rubinstein examines interventions by Jewish writers into an ongoing American fascination with the "imaginary Indian." Rubinstein argues that Jewish writers represented and identified with the figure of the American Indian differently than their white counterparts, as they found in this figure a mirror for their own anxieties about tribal and national belonging. Through a series of literary readings, Rubinstein traces a shifting and unstable dynamic of imagined Indian-Jewish kinship that can easily give way to opposition and, especially in the contemporary moment, competition.

In the first chapter, "Playing Indian, Becoming American," Rubinstein explores the Jewish representations of Indians over the nineteenth century, through narratives of encounter and acts of theatricalization. In chapter 2, "Going Native, Becoming Modern," she examines literary modernism’s fascination with the Indian-poet and a series of Yiddish translations of Indian chants that appeared in the modernist journal Shriftn in the 1920s. In the third chapter, "Red Jews," Rubinstein considers the work of Jewish writers from the left, including Tillie Olsen, Michael Gold, Nathanael West, John Sanford, and Howard Fast, and in chapter 4, "Henry Roth, Native Son," Rubinstein focuses on Henry Roth’s complicated appeals to Indianness. The final chapter, "First Nations," addresses contemporary contestations between Jews and Indians over cultural and territorial sovereignty, in literary and political discourse as well as in museum spaces.

As Rubinstein considers how Jews used the figure of the Indian to feel "at home" in the United States, she enriches ongoing discussions about the ways that Jews negotiated their identity in relation to other cultural groups. Students of Jewish studies and literature will enjoy the unique insights in Members of the Tribe.

Rachel Rubinstein is an assistant professor of American literature and Jewish studies at Hampshire College in Amherst, Massachusetts. She serves on the editorial board of Prooftexts: A Journal of Jewish Literary History and most recently co-edited Arguing the Modern Jewish Canon: Essays on Literature and Culture in Honor of Ruth R. Wisse.

Members of the Tribe stands as a worthy contribution to the study of "Jews and other differences" and an essential investigation of how Jews and Indians have been yoked in the American cultural imagination.

This volume occupies a much needed space in the available literature about Jewish identifications with 'America.' As Rubinstein powerfully argues, Jews could be Indians or cowboys; Indians could be seen as Jew-haters or fellow objects of persecution; all positions might slip into one another and back again."

– Jonathan Freedman, professor of English and American culture at the University of Michigan

Rubinstein's work makes an invaluable contribution to both Jewish and American studies, making a striking argument for the role of both Native Americans and Jews in what she calls 'literary nation-building' And, by illuminating the unique role of Native Americans in the Jewish imagination, Rubinstein provides her readers with an extraordinary account of how modern Jews have negotiated between tribal 'blood-longings' and secular Enlightenment values. This remarkable book is a must-read for those interested in transethnic criticism and the Jewish encounter with modernity."

It is a delight to read the informed discussions here of such relatively unfamiliar works as Sforim's Brief Travels of Benjamin the Third, The Narrative of Antonio de Montezinos, Carvalho's Incidents of Travel and Adventure in the Far West, and the important early-nineteenth-century writings by Mordechai Manuel Noah along with more familiar works by Nathaneal West, Henry Roth, Bernard Malamud, Waldo Frank, Leslie Fiedler, and Arnold Kupat. To have all these writers together in a single volume testifies to the richness of the theme of native America in the Jewish imagination."

4 hours 22 min ago
Happy Pub Date! HOUSE AND HOME is a collection of poems that intensely explore the beauty & wisdom to be found in w… https://t.co/MYnkKJxcrx
2 days 6 hours ago
Join WSU President M. Roy Wilson for a book talk next Wednesday! Copies of his memoir will be available for sale a… https://t.co/6q5w5dtFtu
4 days 6 hours ago
TONIGHT! Join @stephanie_heit at @ShopBooksweet for local author's night! https://t.co/pTny5OErDe