Home » Books » Mediterranean Israeli Music and the Politics of the Aesthetic 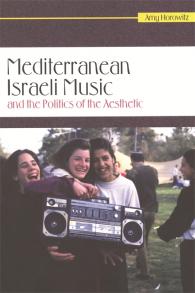 Mediterranean Israeli Music and the Politics of the Aesthetic

In Mediterranean Israeli Music and the Politics of the Aesthetic, Amy Horowitz beautifully unravels and describes many of the interesting and unique processes that explain how, why, and by whom Mizrahim rearticulated their aesthetic experience.”

The relocation of North African and Middle Eastern Jews to Israel in the 1950s and 1960s brought together communities from Egypt, Iraq, Kurdistan, Yemen, and many other Islamic countries, as well as their unique music styles. In the unstable, improvisatory spaces of transit camps, development towns, and poor neighborhoods, they created a new pan-ethnic Mizrahi identity and a homegrown hybrid music that inspired equal parts high-pitched enthusiasm and resistance along the fault lines of Israel’s ethnic divide. In Mediterranean Israeli Music and the Politics of the Aesthetic, author Amy Horowitz investigates the emergence of a new pan-ethnic Mizrahi style of music between the 1970s and 1990s, as the community struggled to gain recognition on the overlapping stages of politics and music.

This volume is both an ethnographic study based on Horowitz’s immersion in the Mizrahi community and a multi-voiced account of community members, who describe their music and musicians who play it. Horowitz focuses primarily on the work of three artists—Avihu Medina, Zohar Argov, and Zehava Ben—who pioneered a recognizable Mizrahi style and moved this new musical formation from the Mizrahi neighborhoods to the national arena. She also contextualizes the music within the history of the community by detailing the mass migration of North African and Middle Eastern Jews to Israel, the emergence of these immigrants as a pan-ethnic political coalition in the 1970s, and the opening up of markets for disenfranchised music makers as a result of new recording technologies, including the cassette recorder and four-way duplicating machine.

Mediterranean Israeli Music and the Politics of the Aesthetic places folklore within the frameworks of nationalism, ethnicity, ethnomusicology, Jewish studies, Israel studies, Middle Eastern Studies, and politics. Anyone interested in these disciplines will appreciate this remarkable volume.

Amy Horowitz is a scholar, activist, and cultural worker. She served as acting director of Smithsonian Folkways Recordings, where she was awarded a Grammy as co-producer of The Anthology of American Folk Music. She teaches courses on music, globalization, and Jerusalem through the International Studies Program and is a research associate at the Middle East Studies Center and the Mershon Center for International Security Studies at The Ohio State University, where she produced Protest Music as Responsible Citizenship: A Conversation with Pete Seeger, Harry Belafonte, Holly Near, and Bernice Johnson Reagon.

Mediterranean Israeli Music and the Politics of the Aesthetic is a thoughtful and timely study on the relationship between politics, identity, and art."

– Karen Armstrong, author of The Case for God

Amy Horowitz brings us a sonic snapshot of a dynamic music culture that is constantly evolving-one that she claims had already changed its contours before she wrote the last sentence of this book. The music, a hybrid outpouring from Israel's ethnic ghettos, is at the core of an emerging community identity. Horowitz brilliantly creates a multilayered hybrid weave-a story that, like the music it presents, is cultural, aesthetic, and political in its breadth."

…her compelling book successfully presents a loving and nuanced portrait of contemporary Israeli society and culture unfortunately all too rare in academic and popular writing about Israel… The products of extensive research, Horowitz's book and its accompanying CD are a must for those interested in a fuller understanding of Israeli and Jewish music and culture."

– Zeek: A Jewish Journal of Thought and Culture

Mediterranean Israeli Music ultimately brings to fruition a rich and extended research project, introducing important ideas about the community dynamics that brought a new musical form into a nation's soundscape. It also provides a valuable blueprint for further study of this music's shifting place within Israeli identity and culture."

Horowitz's significant contribution to this discourse should be of lasting value to students and scholars of Jewish and Israeli society and culture. This is a substantive and worthwhile study of a diverse and multifaceted musical genre, which emerged from and continues to reflect the complex historical, sociopolitical, and multicultural contexts of a particular moment in time and place."

In Mediterranean Israeli Music and the Politics of the Aesthetic, Amy Horowitz beautifully unravels and describes many of the interesting and unique processes that explain how, why, and by whom Mizrahim rearticulated their aesthetic experience."

– Edwin Seroussi, Emanuel Alexandre Professor of Musicology at the Hebrew University of Jerusalem

Throughout the book Horowitz is aware that she is writing for a mixed readership, addressing an audience who may not be educated in music, musical forms, or the characteristics that are particular to Mediterranean music. She explains these aspects carefully with pronounced clarity, as well as providing contextual information about the cultural and historical forces at play for Mizrachi Jews within Israel. The final sections of the book which accompany the CD (with 19 illustrative tracks) offer the lyrics in transliteration and translation, as well as information about each song in terms of musical style, instruments, language, and other pertinent information. These additions are extremely useful in understanding the musical ideas explained within the text, furthering the importance of this text for those outside her field. Certain chapters are accessible to undergraduates, and as a teaching tool this book is incomparable to anything available in English.