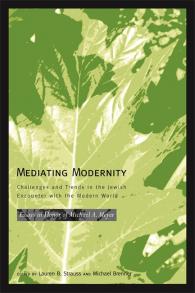 Challenges and Trends in the Jewish Encounter with the Modern World

Essays in Honor of Michael A. Meyer
Edited by Lauren B. Strauss and Michael Brenner

In Mediating Modernity, contemporary Jewish scholars pay tribute to Michael A. Meyer, scholar of German-Jewish history and the history of Reform Judaism, with a collection of essays that highlight growing diversity within the discipline of Jewish studies. The occasion of Meyer’s seventieth birthday has served as motivation for his colleagues Lauren B. Strauss and Michael Brenner to compile this volume, with essays by twenty-four leading academics, representing institutions in five countries.

Mediating Modernity is introduced by an overview of modern Jewish historiography, largely drawing on Meyer’s work in that field, delineating important connections between the writing of history and the environment in which it is written. Meyer’s own areas of specialization are reflected in essays on Moses Mendelssohn, German-Jewish historiography, the religious and social practices of German Jews, Reform Judaism, and various Jewish communities in America. The volume’s field of inquiry is broadened by essays that deal with gender issues, literary analysis, and the historical relationship of Israel and the Palestinians.

Though other volumes have been compiled to honor Jewish historians, Mediating Modernity is unique in the personal and intellectual relationships shared by its contributors and Michael A. Meyer. Scholars of Jewish studies, German history, and religious history will appreciate this timely volume.

19 hours 7 min ago
Hey #movementdetroit fans! WSUPress's TECHNO REBELS is a great way to relive the excitement of @MovementDetroit all… https://t.co/f4nPn8uYj0
1 day 19 hours ago
Check out Cindy Hunter Morgan's new book at https://t.co/o1mzeoKv1M https://t.co/6W9FLg0RLa
2 days 22 hours ago
Wayne State University President M. Roy Wilson with his teacher in high school. Check out this image and many more… https://t.co/W3kp1D7dFX