Home » Books » The Meaning of Citizenship 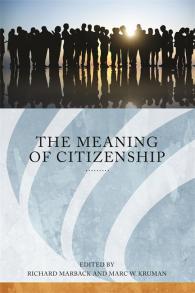 The Meaning of Citizenship

The essays in this volume are drawn from the tenth anniversary conference of the Center for the Study of Citizenship at Wayne State University, whose theme, "The Meaning of Citizenship," provided an opportunity to reflect on a decade of study in the field. In an academic area where definitions are dynamic and multidisciplinary, editors Richard Marback and Marc W. Kruman have assembled fifteen contributors to show some of the rich nuances of membership in a political community.

The Meaning of Citizenship addresses four dimensions of citizenship: the differentiation of citizenship in theory and practice, the proper horizon of citizenship, the character of civic bonds, and the resolution of conflicting civic and personal obligations. Contributors answer these questions from varying disciplinary perspectives, including ethnography, history, and literary analysis. Essays also consider the relevance of these questions in a number of specific regions, from Africa to the Caribbean, Middle East, Europe, and the United States. By identifying the meaning of citizenship in terms of geographic specificity and historical trajectory, the essays in this volume argue as a whole for a cross-disciplinary approach to the issues of inclusion and exclusion that are generated through any assertion of what citizenship means.

The four primary concerns taken up by the contributors to this volume are as timely as they are timeless. Scholars of history, political science, sociology, and citizenship studies will appreciate this conversation about the full meaning of citizenship.

Marc W. Kruman is professor in the department of history and founding director of the Center for the Study of Citizenship at Wayne State University. He is the author of two books—Between Authority and Liberty: State Constitution Making in Revolutionary America and Parties and Politics in North Carolina, 1836–1865—and numerous articles.

The rich and varied essays in this volume make clear that citizenship has multiple, sometimes conflicting meanings. Ranging from Brazil to the Caribbean to West Africa to Israel and not neglecting the United States and Europe, the editors of this volume open the door to illuminating comparisons and to the exploration of connections across national boundaries.

Although this collection works against a unifying notion of citizenship, it admirably succeeds in demonstrating the diverse human and ethical dimensions that are at stake.

From various spots around the globe and periods of modern history, the range of subjects in this volume add to a fuller understanding of the meanings and practices we have come to call ‘citizenship’—and perhaps should be calling ‘citizenships’ in the plural. The Meaning of Citizenship convinces us of the multiple ways in which citizenship has been conceived and the differentiated forms of citizenship that co-exist in a given state at a given time.

– Michael Schudson, professor of journalism in the Graduate School of Journalism, Columbia University, and adjunct professor in the Department of Sociology

Reflective, erudite, and insightful, The Meaning of Citizenship is a welcome contribution to public and college library political science collections.