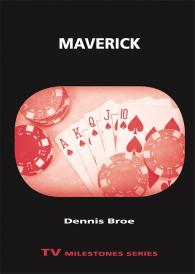 Airing on ABC from 1957 to 1962, Maverick appeared at a key moment in television Western history and provided a distinct alternative to the genre’s usual moralistic lawmen in its hero, Bret Maverick. A non-violent gambler and part-time con man, Maverick’s principles revolved around pleasure and not power, and he added humor, satire, and irony to the usually grim-faced Western. In this study of Maverick, author Dennis Broe details how the popular series mocked, altered, and undermined the characteristics of other popular Westerns, like Gunsmoke and Bonanza. Broe highlights the contributions made by its creators, its producer, Roy Huggins, and its lead actor, James Garner, to a format that was described as "the American fairy tale."

Broe describes how Garner and Huggins struck blows against a feudal studio system that was on its last legs in cinema but was being applied even more rigidly in television. He considers Maverick as a place where multiple counter-cultural discourses converged—including Baudelaire’s Flaneur, Guy DeBord’s Situationists, and Jack Kerouc’s Beats—in a form that was acceptable to American households. Finally, Broe shows how the series’ validation of Maverick’s outside-the-law status punctured the Cold War rhetoric promoted by the "adult" Western. Broe also highlights the series’ female con women or flaneuses, who were every bit the equal of their male counterparts and added additional layers to the traditional schoolteacher/showgirl Western dichotomy.

Broe demonstrates the progressive nature of Maverick as it worked to counter the traditional studio mode of production, served as a locus of counter-cultural trends, and would ultimately become the lone outpost of anti–Cold War and anti-establishment sentiments within the Western genre. Maverick fans and scholars of American television history will enjoy this close look at the classic series.

Dennis Broe’s books include Class, Crime and International Film Noir: Globalizing America’s Dark Art; Film Noir, American Workers, and Postwar Hollywood; Cold War Expressionism: Perverting the Politics of Perception; and the forthcoming The End of Leisure and the Birth of the Binge: Hyperindustrialism and Television Seriality. His television criticism segment, "Broe on the Global Television Beat" appears on Arts Express on WBAI in New York and on the Pacifica Radio Network. He is a professor of film and television studies at Long Island University.

In the late 1950s I attended Antioch College, where popular culture was, well, unpopular. No one listened to pop music, or read bestselling fiction, or went to movies that didn't require subtitles. And God knows nobody watched television.With one exception. On Sunday nights, a crowd assembled in the student lounge, and a roomful of bohemians and anarchists and kultur-snobs sat in rapt attention to watch Maverick on a very small black-and-white screen. All we knew was that Maverick was cool. And the idea that anything on TV could be out-and-out cool was remarkable. Dennis Broe brings a scholar's discipline and a keen critical eye to this welcome examination of a show that was a genuine game-changer in American broadcast television. And he never for a moment loses sight of the fact that Maverick was—and still is—unquestionably cool.

– Lawrence Block, author of the Matt Scudder Series and The Crime of Our Lives

Dennis Broe’s Maverick is a welcome discussion of a classic Western television series. In his well-informed and illuminating study, Broe shows us the show’s distinctive place in television history and Western genre history more generally. This is a valuable resource and a good read.

– Stanley Corkin, professor of history and English, University of Cincinnati

Dennis Broe's highly enjoyable meditation on the most subversive of primetime Westerns is historically rich, politically astute, and appropriately illuminated by the author's wit.

– J. Hoberman, author of The Dream Life: Movies, Media, and the Mythology of the Sixties

Trenchantly, Dennis Broe demonstrates Maverick’s importance to its historical moment: deconstructing imperial ambitions of the Western, reshaping industry practices to enable new modes of creativity, responding to incipient pressures of the times to rethink pleasure, work, and purpose of everyday life, and so on. An insight-filled, far-reaching study.