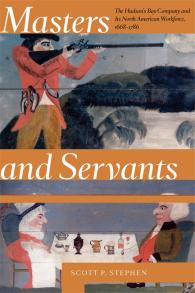 The Hudson’s Bay Company and Its North American Workforce, 1668–1786

With Masters and Servants, Scott P. Stephen has revealed startling truths about the men of the Hudson’s Bay Company. Rather than dedicating themselves body and soul to the Company’s interests, as many Canadians were taught, these workers hired out like domestic servants, joining a "household" with its attendant norms of duty and loyalty. Through painstaking documentary research, Stephen shines welcome light on the lives of these largely overlooked historical actors. The household system produced a remarkably stable political-economic entity, connecting early Canadian resource extraction to larger trends in British imperialism and its emerging social relations. An essential book for labour historians, Masters and Servants will appeal to scholars of early modern Britain, the North American fur trade, Western social history, or business history, and anyone intrigued by the reach of the HBC.

Scott P. Stephen is a historian with Parks Canada, specializing in the fur trade and early settlement eras in western Canada.