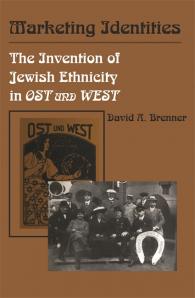 The Invention of Jewish Ethnicity in Ost und West

Marketing Identities analyzes how Ost und West (East and West), the first Jewish magazine (1901-1923) published in Berlin by westernized Jews originally from Eastern Europe, promoted ethnic identity to Jewish audiences in Germany and throughout the world. Using sophisticated techniques of modern marketing, such as stereotyping, the editors of this highly successful journal attempted to forge a minority consciousness. Marketing Identities is thus about the beginnings of "ethnicity" as we know it in the late twentieth century. An interdisciplinary study, Marketing Identities illuminates present-day discussions in Europe and the Americas regarding the experience and self-understanding of minority groups and combines media and cultural studies with German and Jewish history.