Home » Books » On the Margins of a Minority 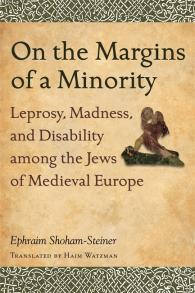 On the Margins of a Minority

Leprosy, Madness, and Disability among the Jews of Medieval Europe

In medieval Europe, the much larger Christian population regarded Jews as their inferiors, but how did both Christians and Jews feel about those who were marginalized within the Ashkenazi Jewish community? In On the Margins of a Minority: Leprosy, Madness, and Disability among the Jews of Medieval Europe, author Ephraim Shoham-Steiner explores the life and plight of three of these groups. Shoham-Steiner draws on a wide variety of late-tenth- to fifteenth-century material from both internal (Jewish) as well as external (non-Jewish) sources to reconstruct social attitudes toward these "others," including lepers, madmen, and the physically impaired. Shoham-Steiner considers how the outsiders were treated by their respective communities, while also maintaining a delicate balance with the surrounding non-Jewish community.

On the Margins of a Minority is structured in three pairs of chapters addressing each of these three marginal groups. The first pair deals with the moral attitude toward leprosy and its sufferers; the second with the manifestations of madness and its causes as seen by medieval men and women, and the effect these signs had on the treatment of the insane; the third with impaired and disabled individuals, including those with limited mobility, manual dysfunction, deafness, and blindness. Shoham-Steiner also addresses questions of the religious meaning of impairment in light of religious conceptions of the ideal body. He concludes with a bibliography of sources and studies that informed the research, including useful midrashic, exegetical, homiletic, ethical, and guidance literature, and texts from responsa and halakhic rulings.

Understanding and exploring attitudes toward groups and individuals considered "other" by mainstream society provides us with information about marginalized groups, as well as the inner social mechanisms at work in a larger society. On the Margins of a Minority will appeal to scholars of Jewish medieval history as well as readers interested in the growing field of disability studies.

Ephraim Shoham-Steiner is a senior lecturer in the department of Jewish history at Ben-Gurion University of the Negev in Beer-Shevah, Israel. He teaches medieval Jewish history and is a member of the scientific committee of the Center for the Study of Conversion and Inter-Religious Encounters and Israeli Center of Research Excellence (I-CORE) at Ben-Gurion University.

On the Margins of a Minority is an original work that brings new sources to the scholarly and interested lay reader on a subject that has become vitally important in the study of history. Shoham-Steiner has identified a fascinating topic, for in identifying what a society defines as marginal, we come to understand better what it considers normative and central.

What does it mean to be a marginalized member of marginalized community? In this volume, Shoham Steiner examines issues of daily life for Jews in medieval Europe who were outside of the norm because of disease (leprosy or other skin conditions,) mental deficiency (either mental illness or developmental delays,) or disability (of mobility, sight, or hearing.) For each of these groups, the author notes the Biblical citations and whether they were part of a legal or narrative passage; the early Rabbinic understanding; the medieval comprehension of the passages and the science available at the time to decipher them; and how the Jews applied all these factors in community life. Shoham-Steiner closely examines the responsa written during this period and points out how the rabbis tried to maintain the cohesiveness of the Jewish community. While geared to scholars, this book is accessible to the layperson. The volume includes extensive notes, bibliography, and index. Highly recommended for academic libraries.

Ephraim Shoham-Steiner’s work is a most welcome addition to a new scholarly frontier. Given the complexity of the rabbinic literature involved and the fact that large amounts of the relevant secondary literature have been produced only in Hebrew, a translation of Shoham-Steiner’s work is a vital addition to the available literature in English on the social history of northern European Jewry during the high middle ages.

Overall, On the Margins of a Minority provides an excellent model for scholars exploring disability both as medical impairment and social construction. The book is pertinent not only to Jewish Studies but to any genre concerned with the perception of marginalized groups. Shoham-Steiner’s readings of the rabbinic literature are particularly important because they make peripheral figures in those works—the disabled—the central focus. On the Margins of a
Minority
is the only major study of disability in the Jewish communities of medieval Europe, and as such should create space for scholars to continue this fascinating line of research. To what extent that space grows over the next few years will be the true measure of the book’s importance.

The book reads very well, and the translation or transliteration of Hebrew terms makes the page accessible to most readers.

This is a path-breaking and extremely important book in the field of medieval Jewish religion and history that opens up new areas for research and comparative studies.

I defy anybody to read this and not take something important from it, and cannot recommend it enough.

– Dean Irwin, Towards a Bibliography of Medieval Anglo-Jewry

[. . .] the English translation (by Haim Waltzman) is clear and readable overall, and makes an important Hebrew study accessible to a wider Anglophone audience. Shoham-Steiner’s careful historical spadework and finegrained readings of relevant texts and contexts render On the Margins of a Minority a significant contribution, one that will open up previously inaccessible sources and neglected figures to further research and analysis.

17 hours 7 min ago
Hey #movementdetroit fans! WSUPress's TECHNO REBELS is a great way to relive the excitement of @MovementDetroit all… https://t.co/f4nPn8uYj0
1 day 17 hours ago
Check out Cindy Hunter Morgan's new book at https://t.co/o1mzeoKv1M https://t.co/6W9FLg0RLa
2 days 20 hours ago
Wayne State University President M. Roy Wilson with his teacher in high school. Check out this image and many more… https://t.co/W3kp1D7dFX