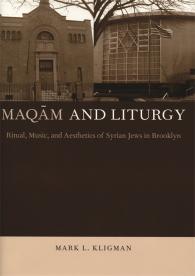 Ritual, Music, and Aesthetics of Syrian Jews in Brooklyn

The author's meticulous research is evident throughout the book; he gains insights that only a seasoned ethnographer deeply established in the community would decipher.

Syrian Jews in Brooklyn, New York, number more than forty thousand and constitute the largest single group of Jews from Syria in the world. Their thriving community includes fifteen synagogues in the Flatbush section of Brooklyn, where the practice of singing Arab melodies is a cornerstone of their religious services. In Maqam and Liturgy, author Mark L. Kligman investigates the multidimensional interaction of music and text in Sabbath prayers of the Syrian Jews to trace how Arab and Jewish traditions have merged in this particular culture, helping to illuminate a little-known dimension of Jewish identity and Jewish-Arab cultural interaction.

Based on fieldwork conducted in 1990-91, Kligman worked closely with the leading Syrian cantors who maintain the community's traditional practices and pass them on to the next generation. Kligman's research demonstrates that Arab culture is manifest in the liturgy of Syrian Jews on many levels. Namely, the maqam system, the modal scales of Arab music, organizes Syrian liturgy through the adaptation not only of Arab melodies but the aesthetics of Arab musical practices, including the extra-musical associations of maqamat that determine which of the eleven modes is to be used. Kligman contextualizes the music and liturgy of Syrian Jewish worship within the disciplines of ethnomusicology, Judaic and cultural studies, and anthropology. A 23-track audio supplement of liturgical chanting is available for download at wsupress.wayne.edu/maqamandliturgy.

Though the process of adapting Arab music and aesthetics into a Jewish liturgical context dates back to the tenth century, the perpetuation of two interconnected Middle Eastern cultures in America is a unique phenomenon. Maqam and Liturgy brings the fascinating culture fusion of the Syrian Jews to the attention of a wider audience, including scholars and teachers of Jewish studies, Middle Eastern studies, anthropology, and ethnomusicology.

Maqam and Liturgy: Ritual, Music, and Aesthetics of Syrian Jews in Brooklyn provides a strong and important contribution to this relatively meager corpus of literature by focusing on practices of liturgical music. . . Maqam and Liturgy clearly makes an important contribution to literature about non-Western Jewish communities in history, ethnomusicology, and Jewish studies."

The author's meticulous research is evident throughout the book; he gains insights that only a seasoned ethnographer deeply established in the community would decipher."

Through his careful presentation of text and tune, Mark L. Kligman conveys both the distinctive musical flavor of Syrian Jewish ritual and its continued significance in Syrian Jewish life. By revealing the vitality of the Judeo-Arab cultural synthesis in a largely unexplored liturgical domain, Maqam and Liturgy stands to make an important contribution to several fields of study.

Maqam and Liturgy is a model for ethnomusicologists, scholars of Jewish music, and students of American religious life on multiple levels. Kligman's interpretation of synthesis between Arab music and Jewish religious practice weaves together text and context, ritual and recitation, and the sound and structure of music and prayer. The complex relation between a proud past in Aleppo and a vigorous present in Brooklyn emerges from the insight of an historian and the sensitivity of an ethnographer, at once participant and observer in an American ethnic community.

– Philip V. Bohlman, Mary Werkman Distinguished Service Professor of the Humanities and of Music, the University of Chicago

Presenting an in-depth and multilayered analysis of a dynamic Judeo-Arab tradition, Kligman makes a major contribution to our understanding of the various meanings and uses of the Eastern Arab maq?m system."

– Scott Marcus, professor of music, University of California¬-Santa Barbara and author of Music in Egypt

Framing his study within the wide Judeo-Arabic synthesis in the field of music, Kligman's Maqam and Liturgy is the first comprehensive study of the mainstream Arabic modal system as it is currently applied by Syrian Jews to their Sabbath prayers. Readers interested in the millenary integration of Jews within Arabic culture, and who are willing to immerse themselves into this cultural fusion avoiding the troubling modern conflict in the Middle East, will find this book inspiring, enlightening, and even unexpected."

– Edwin Seroussi, director of the Jewish Music Research Centre and chair of the department of musicology, the Hebrew University of Jerusalem