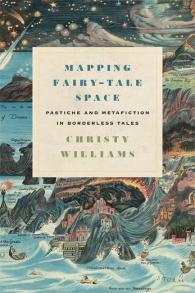 Pastiche and Metafiction in Borderless Tales

Mapping Fairy-Tale Space: Pastiche and Metafiction in Borderless Tales by Christy Williams uses the metaphor of mapping to examine the narrative strategies employed in popular twenty-first-century fairy tales. It analyzes the television shows Once Upon a Time and Secret Garden (a Korean drama), the young-adult novel series The Lunar Chronicles, the Indexing serial novels, and three experimental short works of fiction by Kelly Link. Some of these texts reconfigure well-known fairy tales by combining individual tales into a single storyworld; others self-referentially turn to fairy tales for guidance. These contemporary tales have at their center a crisis about the relevance and sustainability of fairy tales, and Williams argues that they both engage the fairy tale as a relevant genre and remake it to create a new kind of fairy tale.

Mapping Fairy-Tale Space is divided into two parts. Part 1 analyzes fairy-tale texts that collapse multiple distinct fairy tales so they inhabit the same storyworld, transforming the fairy-tale genre into a fictional geography of borderless tales. Williams examines the complex narrative restructuring enabled by this form of mash-up and expands postmodern arguments to suggest that fairy-tale pastiche is a critical mode of retelling that celebrates the fairy-tale genre while it critiques outdated ideological constructs. Part 2 analyzes the metaphoric use of fairy tales as maps, or guides, for lived experience. In these texts, characters use fairy tales both to navigate and to circumvent their own situations, but the tales are ineffectual maps until the characters chart different paths and endings for themselves or reject the tales as maps altogether. Williams focuses on how inventive narrative and visual storytelling techniques enable metafictional commentary on fairy tales in the texts themselves.

Mapping Fairy-Tale Space argues that in remaking the fairy-tale genre, these texts do not so much chart unexplored territory as they approach existing fairy-tale space from new directions, remapping the genre as our collective use of fairy tales changes. Students and scholars of fairy-tale and media studies will welcome this fresh approach.

Christy Williams is associate professor of English at Hawai’i Pacific University. She is co-editor of Beyond Adaptation: Essays on Radical Transformations of Original Works.

Mapping Fairy-Tale Space is an exciting book. Williams guides us skillfully through contemporary fairy-tale landscapes, exploring their storyworlds’ geography and tracing the continued appeal of the genre ‘as a map for lived experience.’ As she traces metafictional critiques and narrative strategies that popular fairy tales in print and on TV share, Williams invites us to revisit the practices of seriality and pastiche in relation to fairy tale and to recognize how opening up narrative borders revitalizes the genre. Richly layered, persuasive, and insightful, this is a study I will keep returning to.

Christy Williams’s book demonstrates her expert, expansive knowledge of fairy tales and their criticism as well as their role in popular and literary culture. This writing is lively and accessible yet sophisticated in its theoretical understanding of narrative and its interactions with geography. Williams is the first critic to bring such an erudite lens to some of the most popular recent incarnations of the classic fairy tales, such as Disney’s Once Upon a Time, and her analysis is invigorating. Her understanding of how narrative creates geography and how connections across borders create narrative is welcome food for thought in these times.

Mapping Fairy-Tale Space is a fascinating study that reconceptualizes fairy tales as geographical locations that can be mapped out and that can also have borders artificially imposed upon them. It illustrates how the paths fairy-tale characters follow, the trails of breadcrumbs they take, function as life maps that guide them and which they also contest. Each chapter adeptly showcases fairy-tale texts in which storyworld boundaries are challenged, collapsed, and stretched to accommodate new meanings in new sociohistorical contexts. Christy Williams provides us with an exciting and dynamic theoretical framework to rethink the fairy tale in terms of narrative geographies.

Williams (Hawai'i Pacific Univ.) explores TV shows Once upon a Time and Secret Garden (a Korean drama), plus five other texts that "have at their center a crisis about the relevance and sustainability of fairy tales," and she argues that they "engage the fairy tale as a relevant genre and remake it to create a new kind of fairy tale for audiences in the 21st century" (p. 3).

Just as the beautifully illustrated cover art evokes complex magical spaces that invite exploration, Williams has created a study that is alive with fascination, giving the sense that the exploration of pastiche in these stories is also her own celebration: ‘[w]hy keep tales or genres separate when bridging them is so much fun?’ (171). While acknowledging that remixing and blending fairy tale and folktale is not a new phenomenon, she highlights the need and continued desire for such metafictional intertextuality in fairy-tale retellings today as a ‘recognition of shared space and simultaneous habitation’ (172). By asking questions about ‘how twenty-first century fairy tales share narrative space’ (169), Williams spins her own yarn, about a shared world that is smaller when our stories connect us.

Anyone who is interested in not only fairy tales, but also the proliferation and intersection of genres and forms within children's media in our postmodern world would find William's study fascinating.

Williams’ text is an invaluable resource, demonstrating the protean and borderless nature of the fairy tale and reflecting the genre’s enduring relevance.

Williams’s critical examinations are thought-provoking not only as considerations of the texts she actually looks at but also as a stimulus for more analysis.

Mapping Fairy-Tale Space offers a clever application of literary theory to fairy tale retellings in a range of popular cultural texts and notably is not restricted to Western retellings. The book may pleasantly subvert the readers’ expectations of what a fairy tale retelling is and the cultural work it performs.