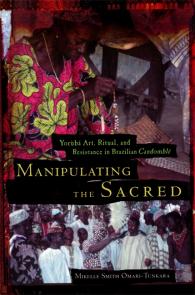 The book is remarkable for its comprehensive field data, rigorous scholarship, and rare insights—all reflecting the author's unique status as a scholar/initiate privy to ritual information seldom accessible to most researchers. It is a major contribution to the literature on African diaspora art and religion.

At a time when the art of the African diaspora has aroused much general interest for its multicultural dimensions, Mikelle Smith Omari-Tunkara contributes strikingly rich insights as a participant/observer in the African-based religions of Brazil. She focuses on the symbolism and function of ritual objects and costumes used in the Brazilian Candomblé (miniature "African" environments or temples) of the Bahia region, which combine Yorùbá, Bantu/Angola, Caboclo, Roman Catholic, and/or Kardecist/Spiritist elements. An initiate herself with more than twenty years of study, the author is considered an insider, and has witnessed how practitioners manipulate the "sacred" to encode, in art and ritual, vital knowledge about meaning, values, epistemologies, and history. She demonstrates how this manipulation provides Brazilian descendents of slaves with a sense of agency—with a link to their African heritage and a locus for resistance to the dominant Euro-Brazilian culture.

Mikelle Smith Omari-Tunkara is a professor in the art department at the University of Arizona.

Manipulating the Sacred is a necessary read for any scholar interested in not only candomblé in Brazil, but other Afro-Atlantic religions as well. It is a noteworthy text that can be used in courses that discuss Afro-Brazilian culture, African diaspora and religion, art history, visual arts, and agency. Omari-Tunkara adds another dimension through her meticulous analysis of the role of art and sacred object as carriers of agentic practices."

. . . an extraordinarily interesting descriptive study of the history, social context, and practice of the African-Brazilian religion, Candomblé, in Bahia, Brazil. . . . the author describes in detail the symbolism and function of sacred objects and costume in Candomblé and argues persuasively that Candomblé affords initiates a valued link with their African heritage and a locus for resistance to the dominant Euro-Brazilian culture. . . . Omari's study contains a rich body of information not accessible in English and largely unknown by non-initiates of Candomblé."

Manipulating the Sacred is a fascinating study of the interconnectedness of art, ritual, and politics in Brazilian Candomblé. The book is remarkable for its comprehensive field data, rigorous scholarship, and rare insights-all reflecting the author's unique status as a scholar/initiate privy to ritual information seldom accessible to most researchers. It is a major contribution to the literature on African diaspora art and religion."

Manipulating the Sacred is the most focused, single-authored examination of sacred art in Bahian Camdomblé Nagô from as art historical perspective to date. With numerous images, both black-and-white and color, glossary of key terms and glossary of the orixás, in addition to the wealth of information presented in the chapters, Omari-Tunkara's book is a valuable historical tool. Through Manipulating the Sacred, the reader gains a better understanding of the role that choice has played in Candomblé Nagô over the centuries."

1 day 2 hours ago
RT @oneitadetroit: Thrilled to announce @WSUPress is releasing the 2E of Sam Greenlee's "The Spook Who Sat by the Door" on Tuesday. In… https://t.co/H7WrVLnlLw
2 days 3 hours ago
With just ONE WEEK left of #PrideMonth, make sure you grab your copy or e-book of any of our @queer_screens titles!… https://t.co/bDWFdJgo1S
3 days 57 min ago
Now available as an e-book for the first time! https://t.co/l4kjSuHhCU