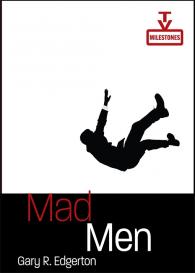 This one-stop primer offers a succinct analysis of one of the most skillfully produced, artistically innovative, and culturally resonant scripted series in modern television. It opens by explaining how Mad Men (AMC, 2007–2015) functions as a representative example of much deeper and more profound structural changes happening in television since the 2000s. Gary R. Edgerton highlights influences driving the creation of the show, including creator Matthew Weiner’s personal connections to the subject matter and the development of the main character, Don Draper (Jon Hamm). Analysis of the show’s story progression is delineated by a pivotal shift from a culturally relevant Zeitgeist phenomenon to a narrative more concerned with Draper’s introspective and existential journey to reconciliation and self-awareness. Cultural reflections are also explored with interrogations of privilege and prejudice, the American Dream, ethnicity, race, gender politics, and class as witnessed through the program’s complex and conflicted characters.
Following its debut, Mad Men quickly became a bellwether of contemporary culture. The award-winning series set the creative standard in drama over the span of its initial run and is now recognized as a milestone in the history and development of scripted television. Throughout its seven seasons, the series struck a delicate balance of being both complex and cerebral while also entertaining and accessible, a balance that Edgerton skillfully carries over to this book.

Gary R. Edgerton is professor of creative media and entertainment at Butler University. He has published twelve books, including The Sopranos (Wayne State University Press, 2013), and more than ninety essays on a variety of television, film, and cultural topics.

From the first scene (‘I love smoking’) to the last (‘I’d like to buy the world a Coke’), Mad Men was all about packaging. With compact precision, venerable television historian Gary Edgerton describes how this remarkable series employed the new aptitudes of twenty-first-century television to repackage the 1960s.

To understand how and why Mad Men made history, read this book! Gary Edgerton offers here a much-needed and comprehensive historian’s perspective on a historic and historical TV series. For TV lovers and history buffs alike.

Gary Edgerton’s comprehensive understanding of Mad Men makes this book a delicious feast for readers. With production research, astute analysis, and detailed readings throughout, Edgerton demonstrates why Mad Men remains one of the smartest and most culturally relevant dramas produced by American television.

– Karen McNally, editor of American Television during a Television Presidency (Wayne State University Press, 2021) and co-editor of The Legacy of Mad Men

As a Triple Crown historian, critic, and fan, the ever-eloquent Gary Edgerton dexterously shape-shifts through the period drama as if a partner in the Sterling Cooper Ad Agency, Don Draper’s psychotherapist, and Matthew Weiner’s production assistant. The keenly crafted chronicle is comprehensive and richly contextualized, a graceful and singular exploration of a touchstone series in which Edgerton identifies, interprets, and illuminates nuances that the rest of us mere Mad Men mortals overlook. Profound and penetrating are understatements. This is another casually brilliant masterpiece from one of the preeminent and prolific voices in media culture criticism.

Gary Edgerton’s meticulous research and industrial/cultural expertise has yielded a rich study of Mad Men that those familiar with this acclaimed show will treasure. It provides a ‘one-stop’ account by deploying the multifaceted analysis that is Edgerton’s forte, allowing Mad Men’s significance to be demonstrated socioculturally, creatively, and industrially. This fascinating book explains why Mad Men—a show about advertising in the 1960s yet one whose overarching obsession is the ‘high-wire act’ performed by Don Draper—so successfully engaged its contemporary audience through its critical reassessment of a much-celebrated yet manifestly flawed past.

22 hours 39 min ago
Today is #smallbusinesssaturday! Make a stop into your favorite local business or #indiebookstore, and get started… https://t.co/yddIwk9cIF
1 day 22 hours ago
Our holiday sale is officially here! Starting TODAY, take 30% off ALL BOOKS with code HOL2 at… https://t.co/s5Dp8iGvDg
3 days 15 hours ago
@upfromsumdirt We are very excited to work with you on this collection!