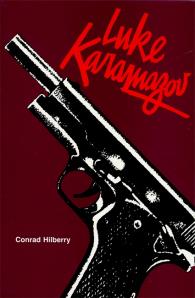 In this well-written account of a psychopathic personality, the author is probing our common humanity, especially its darker side.

Luke Karamazov is the true story of two brothers who were convicted of serial murders. In 1964, Luke Karamozov (née Ralph Searl) confessed to killing five men over a three-month period; following in his grisly footsteps was his younger brother, Tommy Searl, who was sentenced for the rape and murder of four young women in or around the brothers’ hometown of Kalamazoo.

The events described in the book have the drama of fiction, but are very real events. Conrad Hilberry based his account on interviews with the two men, their friends, the woman whom they both married, and prison officials. Choosing to focus more on the texture of the men’s lives than on the crimes themselves, Hilberry explores the movement of their thoughts and the ways in which they have each dealt with their brutal childhoods and their lives in prison.

Luke Karamazov is an unusually vivid and detailed study of two contrasting psychological types. Drawing on Ernest Becker’s Denial of Death, Hilberry presents Karamazov and his brother as extreme instances of behavior and states of mind that, surprisingly, are not uncommon. The result is a story that is at once bizarre and psychologically interesting.

Conrad Hilberry is the author of several books of poetry including Until the Full Moon Has Its Say (Wayne State University Press, 2014) and Sorting the Smoke, which won the Iowa Poets’ Prize. Now retired, Hilberry has had a long career teaching literature and creative writing at Kalamazoo College.

In this well-written account of a psychopathic personality, the author is probing our common humanity, especially its darker side, in ways reminiscent of many of the 'dark' classics of modern literature. Searl is to Hilberry what Kurtz is to Marlow in Joseph Conrad's Heart of Darkness. . . . [A] sympathetic study of the unfortunate ways that his psychopathic subject goes about finding his own form of heroism [. . . ] and reducing the universe to a size that allows him to control it. . . . It is a fascinating portrayal; its fascination is at least partially due to Hilberry's refusal to stereotype or oversimplify his subject.

Two infamous Michigan brothers serving life prison terms for murder are the subject of a new book by a Kalamazoo College professor and poet who said it took him ten years to finish because he was so repulsed by their story. . . . Although their names are changed, the book is the story of Kalamazoo brothers Larry and Danny Ranes. . . . Larry Ranes has since legally changed his name to Monk Steppenwolf — the model name for Luke Karamozov.

18 hours 12 min ago
Wayne State University Press is proud to announce our winner and finalists of the 2022 Next Generation Indie Book A… https://t.co/Ozy1WEQY1i
1 day 23 hours ago
Congratulations to all of the winners! https://t.co/Em8m5qoESk https://t.co/0EX9yD1vge
2 days 23 hours ago
RT @muckrack: Today's featured journalist is @fkwang, Communities Correspondent at @NewsHour. Based in Detroit, Frances covers As… https://t.co/XK9qCAOXhS