Home » Books » Luchino Visconti and the Fabric of Cinema 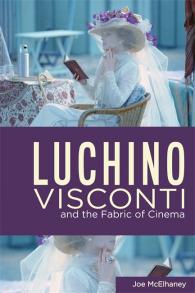 Luchino Visconti and the Fabric of Cinema

In Luchino Visconti and the Fabric of Cinema, Joe McElhaney situates Visconti’s films as privileged and deeply expressive instances of a trope that McElhaney identifies as the "cinema of fabric": a reoccurrence in film in which textiles—clothing, curtains, tablecloths, bedsheets—determine the filming process. An Italian neorealist, Visconti emerges out of a movement immediately following WWII wherein fabric assumes crucial functions, yet Visconti’s use of fabric surpasses his colleagues in many ways, including its fluid, multifaceted articulations of space and time. Visconti’s homosexuality is central to this theory in that it assumes metaphoric potential in addressing "forbidden" sexual desires that are made visible in the films. Visconti’s cinema of fabric gives voice to desires not simply for human bodies draped in fabric but also for entire environments, a world of the senses in which fabric becomes a crucial method for giving form to such desires.

McElhaney examines Visconti’s neorealist origins in Ossessione, La terra trema, and Rocco and His Brothers, particularly through fabric’s function within literary realism and naturalism. Neorealist revisionism through the extravagant drapings of the diva film is examined in Bellissima and Senso whereas White Nights and The Stranger are examined for the theatricalizing through fabric of their literary sources. Visconti’s interest in German culture vis-à-vis The Damned, Death in Venice, and Ludwig, is articulated through a complex intertwining of fabric, aesthetics, politics, and transgressive sexual desire. Finally, Visconti’s final two films, Conversation Piece and The Innocent, assess through fabric both the origins of Italian fascism and the political tensions contemporaneous with the films’ productions.

Fabric in Visconti is often tied to the aesthetic impulse itself in a world of visionaries attempting to dominate their surrounding environments and where a single piece of fabric may come to represent the raw material for creation. This book will tantalize any reader with a keen eye and strong interest in film and queer studies.

Joe McElhaney is professor of film studies at Hunter College/City University of New York. His books include The Death of Classical Cinema: Hitchcock, Lang, Minnelli, Vincente Minnelli: The Art of Entertainment (Wayne State University Press, 2009), Albert Maysles, and A Companion to Fritz Lang. He has published numerous essays on European, Asian, and American cinema.

As Joe McElhaney argues in this persuasive new book, Visconti’s insistence on cloth and clothing is more than a lushing-up of the mise-en-scène; it is the privileged expression of latent political-sexual tensions in the filmmaker’s worldview. Fabric comes to name the substance and secret of Visconti’s style, a veil that McElhaney has the insight neither to lift nor see through but rather to see and make seen in its fully patterned functioning. With an attention perfectly fitted to this style, Luchino Visconti and the Fabric of Cinema covers its subject’s oeuvre as fully as a cape, while hugging that corpus as close as more intimate apparel.

McElhaney carefully reframes the historical, political, and sensual dimensions that connect Visconti’s work to neorealism and queer cinema. What emerges is a vivid portrait not only of a director’s tendencies but of cinema’s resources as a ‘veiling’ and ‘unveiling’ instrument of desire. This exquisitely observant study primes us to notice ‘the cinema of fabric’ well beyond Visconti’s examples, too.

– Rick Warner, University of North Carolina at Chapel Hill, author of Godard and the Essay Film: A Form That Thinks

In addition to his unsurpassed close readings of all Visconti’s major films, Joe McElhaney provides so many kinds of attendant history, with such authority and crystalline economy, that his work rivals the most impressive work on film history that I have encountered. This study demonstrates conclusively that fabric is a central shaping force throughout Visconti’s career, and that it affects our reading not only of bodies and the flow and displacements of desire but of every depicted environment.

Joe McElhaney starts from a brilliant insight—the centrality of fabric to our appreciation and enjoyment of film—and explores this through focusing on a director whose presentation of fabric is so defining of what makes his films loved and admired. What makes the study outstanding and important, however, is the way McElhaney draws out the full implications of this focus on fabric, beyond narrative and symbolism, beyond even clothes and fittings or color and pattern, to how fabric works aesthetically in movies, to cut, flow, veiling, draping. Beautifully written and without ever being speciously clever, Luchino Visconti and the Fabric of Cinema really does reveal not just that fabric is central to cinema but that cinema is fabric.

In this major study of Luchino Visconti, Joe McElhaney looks at fabric as a lush motif, teasing out the genealogy of Visconti’s images across other media as well as the wider film culture from which they emerge. Elegantly interweaving threads of style, history, and sexuality into rich close analysis, McElhaney not only unveils Visconti’s cinema but reveals it anew."

McElhaney’s new book performs a task that is as delicate, intricate, and powerful as the body of work he analyzes. In placing the fabric of Visconti’s cinema so vividly before the reader, he helps us to understand not only these films’ aesthetic sensuality and rigor but also sews Visconti into a broad artistic, political, and historical tapestry. This book marks a milestone in sensitive, beautifully written auteur scholarship and gives us a new Visconti and a new way of seeing—of looking at and through—cinema, all at once.

McElhaney (Hunter College, CUNY) explores the literal and thematic relations between fabrics and the cinema of Italian director Luchino Visconti (1906–76). The author reexamines Visconti’s career through an interest in tactility, narrative, and visually relational uses of fabrics in the context of the director’s mise-en-scène.Though likely too particular for readers unfamiliar with the director and his historical and cultural contexts, the book will inspire veterans to revisit the films.

While there may be few directors with Visconti's particular passion for fabric, McElhaney convincingly argues for its expressive, symbolic, aesthetic, and materialist role in cinematic mise en scene and montage.

oe McElhaney’s new book on the films of the Italian Marxist-aristocrat Luchino Visconti will no doubt find a home next to those of Henry Bacon and Geoffrey Nowell-Smith. Yet, the attempt in Luchino Visconti and the Fabric of Cinema to integrate authorial analysis with a philosophical approach to cinematic materiality means that this latest study makes an appeal far beyond the confines of auteur or Italian cinema studies.

– Will Kitchen, Studies in European Cinema