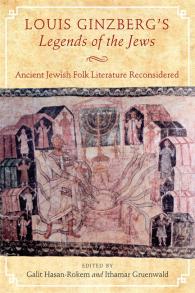 Louis Ginzberg's Legends of the Jews

At the beginning of the twentieth century, many perceived American Jewry to be in a state of crisis as traditions of faith faced modern sensibilities. Published beginning in 1909, Rabbi and Professor Louis Ginzberg’s seven-volume The Legends of the Jews appeared at this crucial time and offered a landmark synthesis of aggadah from classical Rabbinic literature and ancient folk legends from a number of cultures. It remains a hugely influential work of scholarship from a man who shaped American Conservative Judaism. In Louis Ginzberg’s Legends of the Jews: Ancient Jewish Folk Literature Reconsidered, editors Galit Hasan-Rokem and Ithamar Gruenwald present a range of reflections on the Legends, inspired by two plenary sessions devoted to its centennial at the Fifteenth Congress of the World Association of Jewish Studies in August 2009.

In order to provide readers with the broadest possible view of Ginzberg’s colossal project and its repercussions in contemporary scholarship, the editors gathered leading scholars to address it from a variety of historical, philological, philosophical, and methodological perspectives. Contributors give special regard to the academic expertise and professional identity of the author of the Legends as a folklore scholar and include discussions on the folkloristic underpinnings of The Legends of the Jews. They also investigate, each according to her or his disciplinary framework, the uniqueness, strengths, and weakness of the project. An introduction by Rebecca Schorsch and a preface by Galit Hasan-Rokem further highlight the folk narrative aspects of the work in addition to the articles themselves.

The present volume makes clear the historical and scholarly context of Ginzberg’s milestone work as well as the methodological and theoretical issues that emerge from studying it and other forms of aggadic literature. Scholars of Jewish folklore as well as of Talmudic-Midrashic literature will find this volume to be invaluable reading.

Galit Hasan-Rokem is Max and Margarethe Grunwald Professor of Folklore (emerita) at the Hebrew University of Jerusalem and the author of Web of Life: Folklore and Midrash in Rabbinic Literature, Tales of the Neighborhood: Jewish Narrative Dialogues in Late Antiquity, and coeditor (with Regina Bendix) of A Companion to Folklore.

Ithamar Gruenwald is professor emeritus at Tel Aviv University where he chaired the Department of Jewish Philosophy and the Program of Religious Studies. He is the author of Rituals and Ritual Theory in Ancient Israel, Apocalyptic and Merkavah Mysticism, and From Apocalypticism to Gnosticism.

... This book of collected essays is greatly recommended for scholars of Ginzberg, Jewish folklore and Jewish studies. Highly readable, it belongs in academic and personal collections.

The authors remain in awe of Legends, even as they critique it; more than anything they inspire the reader to revisit Ginzberg's work — a masterful and colorful Volkspoesie for the Jewish people — enticing glimpses off which can be found in this volume.

A wonderful volume to mark the centennial of the publication of Louis Ginzberg’s monumental Legends of the Jews, surely one of the great landmarks of modern Jewish literature, and one that has remained in print and is read by scholars and a more generally educated audience alike. The editors assemble a fascinating chorus of voices that as a group illuminate the dynamics that made Ginzberg’s work possible— his erudition, the embeddedness of his monumental effort in a particular cultural trajectory and moment, the relationship of his work to similar literary works. They also demonstrate the enduring vitality of Ginzberg’s opus. This is an important book to accompany anyone’s study of The Legends of the Jews.

Celebrating the centennial anniversary of The Legends of the Jews, this book revisits Louis Ginzberg’s seminal work, offering rich and illuminating essays on its underlying cultural aspects, as well as staging a lively intellectual dialogue between contemporary scholarship and its past.

– Dina Stein, associate professor of Hebrew and comparative literature at University of Haifa

This excellent volume should appeal to a wide variety of readers interested in Ginzberg’s work through the lens of Jewish studies, religious studies, Jewish-American history, and folklore.

3 hours 48 min ago
Happy Pub Date to THE SPOOK WHO SAT BY THE DOOR, SECOND EDITION! This new edition of a literary classic now includ… https://t.co/XrCsLZvf4D
3 hours 52 min ago
RT @DarkProjections: Returned from a great two weeks in Europe to find copies of my new book! Kolchak:The Night Stalker, one of the Pion… https://t.co/kPJ5kKLRyr
1 day 48 min ago
RT @oneitadetroit: Thrilled that @WSUPress is releasing the 2E of Sam Greenlee's "The Spook Who Sat by the Door" tomorrow. Introductio… https://t.co/hZpAjxluIl