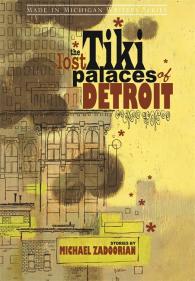 The Lost Tiki Palaces of Detroit

If Detroit can produce such literary talent as Zadoorian, however, it may just thrive again.

In The Lost Tiki Palaces of Detroit Michael Zadoorian follows characters coming to terms with the past and the present in a broken city. Rusty, ornery, and down at the heels, Zadoorian’s characters have made the wrong choices, been worn down by bad news, or survived traumatic events, but like the city they live in, they are determined not to let tragedy and rotten luck define them. Rich with detail and brimming with feeling, Zadoorian’s deceptively simple stories lead readers into the inner lives of those making the best of their flawed surroundings and their own imperfections.

Zadoorian’s stories are drawn from the everyday events that come to define his characters’ lives. A woman responsible for putting down animals at a veterinary clinic travels to Mexico to stage a ritual for her victims, a veteran returns a flag stolen from a Japanese soldier he killed in World War II, an elderly couple takes a final road trip to a mystery spot out west, and a man spends his life waiting to inherit his parents’ kitschy 1960s furniture but instead sells it all. Characters also find their lives shaped by seemingly random occurrences, like the junk shop owner who must stop the stranger with a vendetta against him, the woman who becomes obsessed with her in-laws’ talking dog, and the urban spelunker who finds love and acceptance with a reader of his blog. Their close connection to Detroit also infuses Zadoorian’s stories with themes significant to the city, including issues of racial tension, political unease, and economic hardship.

Zadoorian’s writing throughout this collection is clear and vivid, never getting in the way of his characters or their stories. The unique but relatable characters and unexpected stories in The Lost Tiki Palaces of Detroit will appeal to all readers of fiction.

If Detroit can produce such literary talent as Zadoorian, however, it may just thrive again. These stories awaken, alarm, grieve, giggle a bit, but mostly observe what we may wish to toss away, yet should first look directly in the eye-so that we can understand something more of our own condition.

These newly envisioned stories of Detroit come at you without apology for the gritty language of the city, the racism, the madness of everyday life. The whiff of 'presence,' of being there, grabs at your throat. . . . Zadoorian uses his city, and his talent, to paint a picture of what is, as it truly is, and finds its pockets of beauty, its stolid citizens, its places of the heart. . . . In Zadoorian's hands Detroit is safe, painted with a silvery luster that falls just short of love."

The stories in Michael Zadoorian's new collection, The Lost Tiki Palaces of Detroit, represent the serrated leading edge of the Barthelmean aesthetic dictum of being on 'the leading edge of the junk phenomenon.' The prose here is a cacophonous chockablock collision with a no-nonsense nonsense knockout nominative wall of sound. This collection is stuffed with stuff."

The stories in The Lost Tiki Palaces of Detroit give the reader such a deep and intimate vicarious journey, one would think that Zadoorian has had several past lives to draw on for material. As I read, I was always amazed to discover what lurked beneath them."

– Luis Resto, Oscar- and Grammy-winning composer of "Lose Yourself" from 8 Mile

What can one say of Zadoorian-chronicler of the lost, of junk and detritus, of the second-hand and hand-me-down. The abandoned. The soon-to-be-no-more. There is such poetry in these stories. Such wry wit and sadness. Such despair and, oddly, hope. In The Lost Tiki Palaces of Detroit, the city becomes a whole nation's ruined Byzantium: destitute and still strangely desired. Lost. And found again."

The Lost Tiki Palaces of Detroit by Michael Zadoorian is a collection of glorious short stories about Detroit's quirky characters, told with Zadoorian's pitch-perfect renditions of the unique sounds of Detroit."

The stories in The Lost Tiki Palaces of Detroit begin on the west side before moving east and then downtown, a literary tour done with the admirable, offhand grace of the best guidebooks. Zadoorian knows the streets and side streets and alleyways of his city and its surround; better, he knows the humor, the sadness, and the sometimes hidden beauty of life in the Rust Belt, and he pins it down on the page with wonderful precision."

– Paul Clemens, author of Made in Detroit

31 min 23 sec ago
TONIGHT! Join @stephanie_heit at @ShopBooksweet for local author's night! https://t.co/pTny5OErDe
22 hours 14 min ago
Have you had a chance to check out our new Spring & Summer 2023 Catalog?! From a new lyric essay collection to a p… https://t.co/cNAo9WjL9K
1 day 20 hours ago
RT @shondabuchanan: Tonight! Feb. 1, 2023, 6:30pm Mountain Time -- Virtual reading for #lewisandclarklibrary Lewis & Clark Library in H… https://t.co/UAmMoIlq1w