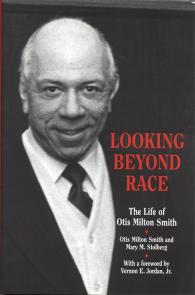 The Life of Otis Milton Smith

This book is a fitting tribute to his life.

In Looking Beyond Race, Otis Milton Smith (1922-94) recounts his life as an African American who overcame poverty and prejudice to become a successful politician, going on to become the first black vice president and general counsel of General Motors.

Born in the slums of Memphis, Tennessee, Smith was the illegitimate son of a black domestic worker and her prominent white employer. Although he identified with his mother's blackness, he inherited his father's white complexion. This left him open to racism from whites, who resented his African American heritage, and blacks, who resented his skin color.

Throughout his life, Smith worked with and met many prominent Americans. He knew boxer Joe Louis, future general Daniel "Chappie" James, future Detroit mayor Coleman Young, and the nation's first African American general, B. O. Davis Jr. Through politics he knew Michigan's prominent politicians and was appointed by Governor John Swainson to the Michigan Supreme Court, making him the first black man since Reconstruction to sit on any supreme court in the nation. Smith also knew nationally known figures such as Eleanor Roosevelt, Adam Clayton Powell Jr., Estes Kevfauver, and presidents John F. Kennedy and Ronald Reagan. Through his civil rights work, he met A. P. Tureaud, Roy Wilkins, and Benjamin Hooks, and he worked closely with Vernon Jordan.

Looking Beyond Race provides a rare glimpse into the inner workings of America's largest corporation. Smith was an early advocate of the increased cooperation between business and government that was so necessary for business negotiating the complexities of a global economy. In 1983 he retired as general counsel for the corporation,having been the company's first black officer.

This memoir, which Smith dictated during the three years before his death in 1994, is a compelling tale that ends with the inspirational story of Smith's reconciliation with his white relatives who still live in the South. In this highly readable memoir, Looking Beyond Race provides a moving tale that will appeal to readers interested in African American history, politics, labor relations, business, and Michigan history.

Mary M. Stolberg, a historian and a former reporter for the Pittsburgh Press, devotes her time to writing. She is the author of Fighting Organized Crime (Northeastern University Press, 1995) and Bridging the River of Hatred: The Pioneering Efforts of Detroit Police Commissioner George Edwards (Wayne State University Press, 1998).

Otis and I attended Booker T. Washington High School together in Memphis where he was a serious, articulate, and highly motivated student. Later I knew him in Detroit where I pastored a church, and he was a legal trailblazer as a member of the state supreme court and as general counsel of General Motors. I ran into him often through my civil rights work. He was steadfast and uncompromising about truth and justice and brought dedication and zeal to all he did. This book is a fitting tribute to his life.

– Benjamin Hooks, former executive director of the NAACP and chair of the Leadership Conference on Civil Rights