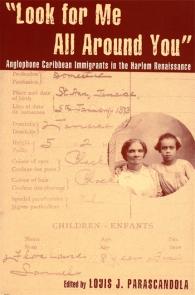 "Look for Me All Around You"

Timely and well-edited, this interdisciplinary anthology of Caribbean writings during the Harlem Renaissance era will be indispensable to expanding debates on transnationalism in both American Studies and Postcolonial Studies.

Interdisciplinary in scope, this anthology redresses the undue neglect of Anglophone Caribbeans—almost 25 percent of the Black population in Harlem in 1920—and their pivotal role in the literary, cultural, and political events shaping the Harlem Renaissance. The poetry, fiction, drama, and essays included explore a variety of issues, such as the increasing emphasis on race and image building, the development of a Black aesthetic, progressive politics, and the struggle to define the status of Blacks in America. Both the literary and political works show the spirit of the New Negro, one emphasizing racial pride and aesthetic consciousness.

Examined closely are those Black and Carribean American figures involved in the Black nationalism movement, socialist groups, and trade unions, including such prominent figures as Marcus Garvey and his two wives, Amy Ashwood and Amy Jacques Garvey, Hubert Harrison, W. A. Domingo, and Frank Crosswaith. Also explored are the developing communist movements as manifested in the writings of Cyril Briggs, Richard B. Moore, Otto Huiswoud, and George Padmore. Essays review the crucial literary contributions of Claude McKay, Eric Walrond, and dramatist Eulalie Spence, as well as historians Arthur Schomburg and J. A. Rogers. This anthology of writers, with accompanying discussions about their works placed in the context of their own time, will be of interest to anyone examining the Harlem Renaissance and the larger Black and Caribbean contribution to cultural and political thinking.

Louis J. Parascandola is associate professor of English at Long Island University and author of Winds Can Wake up the Dead: An Eric Walrond Reader (Wayne State University Press, 1998).

Timely and well-edited, this interdisciplinary anthology of Caribbean writings during the Harlem Renaissance era will be indispensable to expanding debates on transnationalism in both American Studies and Postcolonial Studies."

Against the background of the complex social tensions of the times, Parascandola's text offers a comprehensive and timely reminder of the multi-faceted contribution of a marginalized community to the most significant cultural and ideological event in New York City's history. Of special interest are accounts of the achievements of lesser-known voices and organs of social activism. Yet again, Parascandola extends the Harlem pantheon to acknowledge the pivotal role of Caribbean artists and intellectuals."

Look for Me All Around You provides a generous, balanced, much-needed collection of Anglo-Caribbean writing from the Harlem Renaissance. The essays, poetry, drama, and fiction, introduced by Louis J. Parascandola's superb discussion of Caribbean contributions to black politics and literature in the early twentieth century, demonstrate how distinctive-and how crucial-the Caribbean contribution to the movement really was. Anyone interested in the Harlem Renaissance will want to own this book."

In Look for Me all around You, Louis Parascandola has identified, selected and gathered together a wide variety of writings by anglophone Afro-Caribbeans in the United States during the Harlem Renaissance years. Augmented by a fine introduction, this is a welcome and valuable anthology, adding to the growing body of literature on the truly remarkable and enduring contribution of those whom Du Bois in 1920 dubbed this new Ethiopia of the Isles" in America."