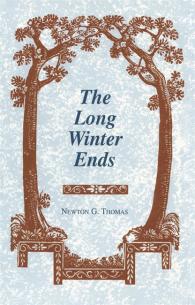 A reprint of the 1941 novel by Newton G. Thomas, The Long Winter Ends tells the story of a year in the life of a young emigrant miner who leaves Cornwall in the southwest of England to work in the copper mines of Michigan's Upper Peninsula. Through Jim's story, The Long Winter Ends offers a glimpse into the lives of an often neglected emigrant group that played an important role in the development of the Great Lake and American mining industries since the 1840s. Drawing on his own experiences as a young Cornish immigrant in the mining communities of the Upper Peninsula, Thomas incorporated firsthand knowledge of the work routines and vocabulary of underground mining into this novel. With an introduction providing information about the cultural history of the Cornish, this narrative traces the Cornish emigrant experience from the failure of the mines in Cornwall, their hopes to preserve Cornish traditions in America, and then finally the acceptance of a future in America.

Newton G. Thomas was born in Stoke, Cornwall, in 1878 and emigrated to Michigan's Upper Peninsula as a child. He was on the faculty at Northwestern University Dental School, taught histology at the University of Illinois, and served as secretary of the College of Dentistry in Chicago.