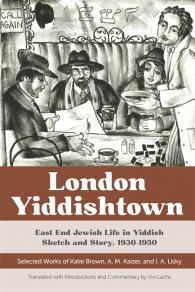 Translated with Introductions and Commentary by Vivi Lachs

In London Yiddishtown: East End Jewish Life in Yiddish Sketch and Story, 1930–1950, Vivi Lachs presents a selection of previously un-translated short stories and sketches by Katie Brown, A. M. Kaizer, and I. A. Lisky, for the general reader and academic alike. These intriguing and entertaining tales build a picture of a lively East-End community of the 30s and 40s struggling with political, religious, and community concerns. Lachs includes a new history of the Yiddish literary milieu and biographies of the writers, with information gleaned from articles, reviews, and obituaries published in London’s Yiddish daily newspapers and periodicals.

Lisky’s impassioned stories concern the East End’s clashing ideologies of communism, Zionism, fascism, and Jewish class difference. He shows anti-fascist activism, political debate in a kosher café, East-End extras on a film set, and a hunger march by the unemployed. Kaizer’s witty and satirical tales explore philanthropy, upward mobility, synagogue politics, and competition between Zionist organizations. They expose the character and foibles of the community and make fun of foolish and hypocritical behavior. Brown’s often hilarious sketches address episodes of daily life, which highlight family shenanigans and generational misunderstandings, and point out how the different attachments to Jewish identity of the immigrant generation and their children created unresolvable fractures. Each section begins with a biography of the writer, before launching into the translated stories with contextual notes.

London Yiddishtown offers a significant addition to the literature about London, about the East End, about Jewish history, and about Yiddish. The East End has parallels with New York’s Lower East Side, yet London’s comparatively small enclave, and the particular experience of London in the 1930s and the bombing of the East End during the Blitz make this history unique. It is a captivating read that will entice literary and history buffs of all backgrounds.

Vivi Lachs is a social historian, Yiddishist, and research fellow at Queen Mary, University of London. She is a teacher, Yiddish singer, and the author of Whitechapel Noise (Wayne State University Press, 2018). She organizes the Yiddish Open Mic and the Great Yiddish Parade and has produced two CDs of London Yiddish songs from the old East End: Whitechapel, mayn vaytshepl, and Don’t Ask Silly Questions. Vivi Lachs was a 2019 Yiddish Book Center Translation Fellow. This volume is in part a result of her fellowship.

Vivi Lachs’s new book is a novel and successful experiment in re-creating the experience of everyday London Jews in the middle decades of the twentieth century. Lachs draws on the work of three neglected Yiddish writers to explore the needs and hopes of Jews who too frequently escape the attention of historians. We learn much about gender roles, courting and marriage, tensions between parents and children, religious observance, and social mobility among Jewish Londoners.

Vivi Lachs’s London Yiddishtown is a triumph. It unearths for an English-speaking audience the authentic voice of the Jewish East End during the years of its dissolution and eventual dispersal. It gives us, in all its sympathetic richness and ironic humor, the internal contradictions of a community that fractured as much from within as from without. Here, in the work of these hitherto-unknown Yiddish writers, is the gold that Arnold Wesker would mine for the theater just a few years later.

Vivi Lachs is a leading authority on the understudied subject of Yiddish in England. In London Yiddishtown she has added to the history of its development and use in the 1930s and 1940s, including biographies and translations of three important prose writers.

A fascinating window into a previously closed world for those no longer able to access the rich past of their Yiddish-speaking forebearers.

– Rachel Lichtenstein, author of Rodinsky’s Room and On Brick Lane

Yiddish London comes alive in this wonderful selection of stories from the East End of the 1930s. A joy to read, these vibrant episodes of Jewish immigrant life, sometimes humorous, sometimes moving, are expertly translated and historically contextualized by Vivi Lachs, providing the reader with a unique look at the Yiddish subculture that bubbles just below the surface of contemporary English Jewry. Offering a window into a Jewish life that has disappeared, the stories in London Yiddishtown reveal immigrant hopes, fears, dreams, and aspirations, and do so while painting a vivid picture of a community walking between two worlds.

– Eddy Portnoy, author of Bad Rabbi and Other Strange but True Stories from the Yiddish Press

What a treat. A book that brings to life exactly where and how my parents lived. For anyone, though, following the people who came out of Eastern Europe and created Yiddishtowns in London, Manchester, New York, and elsewhere, this is a wonderfully detailed, scholarly, and human read.

– Michael Rosen, author of Many Different Kinds of Love

Well illustrated and full of fascinating biographical and bibliographic information, London Yiddishtown is an excellent introduction to three sadly neglected Yiddish writers and their world. It ends with the best chapter in the book, a forty-page essay on the Yiddish literary scene of the 1930s and 1940s that gives more attention to refugee Yiddish writers such as Itzik Manger, A. N. Stencl and Esther Kreitman.

Vivi Lachs’s excellent book is accessible to all.