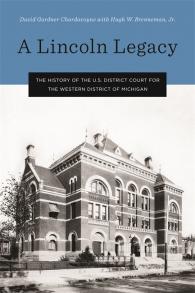 The History of the U.S. District Court for the Western District of Michigan

A Lincoln Legacy: The History of the U.S. District Court for the Western District of Michigan by David Gardner Chardavoyne with Hugh W. Brenneman, Jr. provides the first and only comprehensive examination of the history of the United States federal courts in the Western District of Michigan. The federal courts were established by the U.S. Constitution to adjudicate disputes involving federal laws, disputes between litigants from different states involving state and federal laws, and to punish violations of criminal laws passed by Congress. During the Civil War, Abraham Lincoln signed legislation creating two federal districts in the state of Michigan: the Eastern and Western Districts—the latter of which is headquartered in Grand Rapids and which now encompasses the western half of the Lower Peninsula and all of the Upper Peninsula. With the rapid expansion of legislation passed by Congress, the increasing mobility of society, and the growth of interstate commerce, the federal courts have assumed an important and sometimes dominant role in major litigation today.

In A Lincoln Legacy, Chardavoyne tracks the history of these courts over eleven chapters, from their creation by the Northwest Ordinance of 1787 to 2020. He discusses the changes in society that drove the evolving federal litigation and some significant cases heard in the Western District. Additionally, fifteen appendices are included in the book, listing of all the federal circuit and district judges in the Western District; commissioners; magistrate judges and bankruptcy judges; U.S. Attorneys; clerks of the courts; and more. Chardavoyne also identifies auxiliary offices and organizations revolving around the federal court that play a major role in its activities (e.g., the U.S. Attorney’s Office, the Federal Public Defender’s Office, the Federal Bar Association, etc.).

A Lincoln Legacy provides a thorough examination of the history of the federal courts of Western Michigan. It will appeal to those learning and practicing law, as well as those with an interest in Michigan history.

Hugh W. Brenneman, Jr. is a retired United States Magistrate Judge for the U. S. District Court for the Western District of Michigan, having served for thirty-five years on that court. He is presently the Court Historian. He is a graduate of Alma College and the University of Michigan Law School, and lives with his wife in West Michigan.

Being a member of the Western District of Michigan has meant learning from heroes and making lifelong friends.It is not just about the rule of law; it is also about the rule of honor, courtesy, and civility among rivals. With our history, we write our future.

A Lincoln Legacy masterfully guides readers through the origins of jurisprudence in the Western District of Michigan to the modern-day construct. The carefully chronicled legal, political, and human elements instruct historical details within eloquent storytelling to bring life to the court Lincoln created.

In A Lincoln Legacy, Brenneman and Chardavoyne provide a comprehensive, informative, and thoroughly enjoyable history of the U.S. District Court for the Western District of Michigan and of the state writ large. From its examination of the post-colonial, pre-statehood territorial period to the modern day, the authors walk us through some of the most substantial cases. The discussion of the interplay between the state and federal government and between the three branches of government, including the appointments and funding process, is as timely today as it was in 1863 when President Lincoln established the Court. A must-read for all lawyers and judges but also for any citizen seeking to understand our state’s history and the interworkings and interrelationships of the governments which serve us.

A Lincoln Legacy is an extraordinary contribution to the story of Michigan. In recounting the history of the United States District Court in exquisite detail, A Lincoln Legacy brings to life the judges, cases, and characters that have shaped the law in West Michigan for more than a century and a half.

Relying (harmlessly) on a little hearsay and inadmissible character evidence, A Lincoln Legacy is a clear and convincing winner.

A Lincoln Legacy provides a thorough examination of the history of the federal courts of Western Michigan and will have a special appeal to those learning and practicing law, as well as anyone with an interest in Michigan history.

A Lincoln Legacy is a comprehensive and encyclopedic account of the origins and development of this Grand Rapids-based federal court. It contains biographical information about all its judges, for example, which contain historical context that provides a fine background for the entire book. It also describes, with excellent photographs, the various buildings that have housed Western District courts over the years. This will be of interest not just to anyone who has worked in the legal world of the Wolverine State but also to anyone interested in its general history.