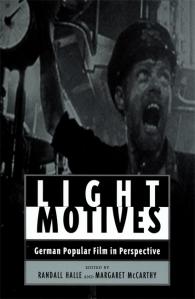 This superb collection sweeps away tiresome cliches with path-breaking, sophisticated analyses of films from 1919 to the present, including contributions on the much neglected cinema of the 1950s and 1960s.

Critics rarely associate popular film with German cinema, despite the international success of such films as Das Boot (1981), The Never-Ending Story (1984), Run, Lola, Run (1998), and recent German comedies, all representing a rich body of work outside the parameters of high culture. This very success compels the authors of Light Motives to take an unprecedented look at German popular film across the historical spectrum and to challenge the tendency among critics to divvy up German film, like Germans themselves, into the Good and the Bad. Together the essays reexamine popular film production along with larger cultural, historical, and political meanings suggested by the term "popular."

Most critical accounts have focused on the golden era of Weimar film and the New German Cinema of the 1960s and 70s leaving much of popular film by the wayside. This volume attributes the division to such sources as Frankfurt School dictates, Goethe Haus film offerings, and state-funded film production during the 1970s, which promoted high-culture art films to broadcast the success of West German democratization.

The essays challenge the traditional shape of German film history, while offering in-depth analyses of films that have until now been beyond the pale of critical attention. What emerges is a "Never-Ending Story" of oft-repeated obsessions, overlapping generic forms, omnipresent or subtle nods to Hollywood, and myriad political concerns irreducible to a unified message or aesthetic form—all bearing witness to the vibrancy of German culture.

Randall Norman Halle is an assistant professor of German Studies and Film Studies at the University of Rochester.

Margaret R. McCarthy is an assistant professor at Davidson College.

Light Motives: German Popular Film in Perspective is one those books whose evocative and aptly chosen title describes precisely, creatively, and succinctly the subject matter that it treats. With more than 400 pages, this is a substantial collection that delivers what it promises. The introduction is learned but lucid and clear. The editors, who contributed essays as well, set the tone for a book that offers depth of scholarship while still remaining of interest to the non-specialist. This is entirely fitting for a volume that abandons preconceived notions of what constitutes a significant film and assesses the previously ignored.

– Seminar: A Journal of Germanic Studies

Light Motives makes an important contribution to the reassessment of German cinema from the perspective of popular genres, visual pleasures, and mass cultural practices. Informed by cultural studies, individual readings move beyond the old divisions among art cinema, escapist entertainment, and film propaganda and present us with a very different national cinema and, by extension, film history. Very stimulating!

Overall, Light Motives is among the books that mark a turning-point in the reception of German cinema abroad, a reception in which, somewhat paradoxically, highly idiosyncratic filmmakers like Rainer Werner Fassbinder, Wim Wenders, and Werner Herzog were often taken as representative of German cinema. Halle's and McCarthy's Light Motives corrects this imbalance. It provides critical discussion of an aspect of German culture that used to be of interest to a small community of experts on German culture, and as it expands this community, it invites a broader audience interested in popular film to join the discussion.

Abandon any preconceived notion that popular cinema is escapist, unpolitical, naive, kitschy, big-budget, propagandistic, or for the uneducated! Forget equating German cinema with Teutonic demonism or morose self-introspection! This superb collection sweeps away tiresome cliches with path-breaking, sophisticated analyses of films from 1919 to the present, including contributions on the much neglected cinema of the 1950s and 1960s.

German filmmaking has always been interesting, sometimes difficult and sometimes innovative. This collection demonstrates that history and tradition and illustrates how it goes on today. The range of voices reflects the range of perspectives German cinema offers, while the depth of scholarship should satisfy the most critical connoisseur. Yet this is not just a collection for specialists. It should claim the attention of anyone interested in the creative tension between culturally-specific, national film industries and today's globalised media culture.