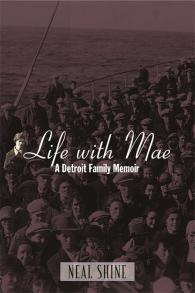 …a sweeping, emotional, charming, and dutifully honest account of Mae Shine and her family, which glows with nostalgia and love and proves the hypothesis that remarkable sons usually come from remarkable mothers.

In Life with Mae, the late Neal Shine combines an engaging memoir of his family life in prewar Detroit with a biography of his mother, Mae, whose vibrant spirit and fierce affection left an indelible mark on her three sons and their friends and neighbors.

Mae was born in 1909 in the small town of Carrick-on-Shannon, Ireland, where her father ran the depot that distributed Guiness Stout. Going into service as a housekeeper at fourteen, Mae quickly saw that the only future she had in Ireland was as a servant. By the time she was eighteen, she had saved enough money from her housekeeping job for a one-way ticket to the United States, where she eventually settled in Detroit.

Shine, longtime editor and former publisher of the Detroit Free Press, tells his story in a series of entertaining interconnected vignettes, reflecting on his mother, his family life in Detroit, and later his journey to visit family in Ireland. Whether recounting Mae’s feud with a local tavern owner, her distrust of the food sold by local grocers, or her standoff with a department store deliveryman who had come to repossess their furniture, Shine lovingly conveys his mother’s fierce protective streak, her effervescent personality, and her outspoken identification with the poor. For fans of Shine’s insightful and humorous storytelling, as well as fellow Detroiters and readers with Irish roots, Life with Mae will be an entertaining and satisfying read.

Neal Shine was the former editor and publisher of the Detroit Free Press, as well as emeritus professor of journalism at Oakland University in Rochester, Michigan. During his years as publisher he was heavily involved in the life of the community, serving on the boards of more than thirty-five civic and community organizations. He received more than three-dozen awards for his community work and numerous awards for his journalism.

An endearing and gifted storyteller, Neal Shine will make you laugh out loud, choke with tears, and, most of all, remember and celebrate the remarkable 'Maes' in your own life."

Neal Shine blesses us with a loving look at his colorful mother Mae and her Irish brood. It's a delightful romp through the family history. As lively as an Irish reel, with a touch of sentimental flavor."

In Life with Mae: A Detroit Family Memoir Neal uses his gift for storytelling to recreate his mother's triumphant journey from Ireland to Detroit and from servitude to success."

If you haven't read Life with Mae you should. It will bring back memories of the strong women in your life who helped shape you into the adult you are today."

Life with Mae: A Detroit Family Memoir is the true story of daily life in Detroit as well as a biography of the author's strong-willed and spirited mother Mae. Life with Mae recounts her quirks, enthusiasm, protection, and love, as well as her identification with and compassion for the poor and downtrodden. An inspirational memoir and tribute."

Neal Shine was good at many things, but he was best at storytelling. Here in these pages is his final proof of that-a sweeping, emotional, charming, and dutifully honest account of Mae Shine and her family, which glows with nostalgia and love and proves the hypothesis that remarkable sons usually come from remarkable mothers."

– Mitch Albom, author of Tuesdays with Morrie and For One More Day

In Life with Mae, Neal Shine has accomplished something few journalists ever have: an actual work of literature. This book should be required reading for anyone interested in Ireland, Detroit, or the immigrant experience, plus anyone who loves a spellbindingly good story that happens to be true."

If you are a mother or have a mother, if you're Irish or wondered about the Irish, if you've ever loved someone with all your heart, this book is for you. The shy, 'mopey,' but clever son of a feisty mother pays tribute to the smacks she gave her three sons: loving challenges that helped shape Neal Shine, journalism in Detroit, and the history of the Motor City."

23 hours 24 min ago
Today is #smallbusinesssaturday! Make a stop into your favorite local business or #indiebookstore, and get started… https://t.co/yddIwk9cIF
1 day 23 hours ago
Our holiday sale is officially here! Starting TODAY, take 30% off ALL BOOKS with code HOL2 at… https://t.co/s5Dp8iGvDg
3 days 16 hours ago
@upfromsumdirt We are very excited to work with you on this collection!