Home » Books » Life is Like a Chicken Coop Ladder 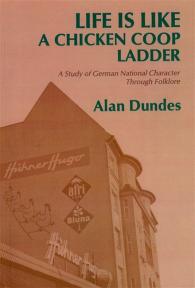 A Study of German National Character through Folklore

A work of major importance that demonstrates the value of folklore for understanding national character.

Alan Dundes is a professor of anthropology and folklore at the University of California at Berkeley. He earned his Ph.D. at Indiana University.

A work of major importance that demonstrates the value of folklore for understanding national character.

Entertaining yet erudite, amusing as well as profound. The author skillfully links together Mozart and sausages, brass bands and anti-Semitism, all to produce an impressive overall picture of a people.