Home » Books » The Life and Work of Ludwig Lewisohn 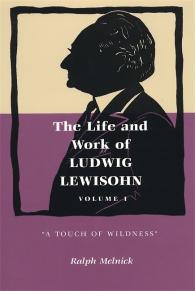 The Life and Work of Ludwig Lewisohn

Volume 1: "A Touch of Wildness"

An imposing literary figure in America and Europe during the first half of the twentieth century, Ludwig Lewisohn (1882-1955) struggled with feelings of alienation in Christian America that were gradually resolved by his developing Jewish identity, a process reflected in hundreds of works of fiction, literary analysis, and social criticism. Born in Berlin, Lewisohn moved with his family in 1890 to South Carolina. Identified by others as a Jew, he remained an outsider throughout his youth. Lewisohn became a notable scholar and translator of German and French literature, teaching at Wisconsin and Ohio State. Following his mother's death in 1914, he began to explore the Jewish life he had rejected, and by 1920 became a Zionist committed to fighting assimilation. Accusatory and inflammatory, his memoir Up Stream (1922) struck at the very heart of American culture and society, and caused great controversy and lasting enmity.

As strong emotional influences, the women in Lewisohn's life—his mother and four wives—helped to frame his life and work. Believing himself liberated by the woman he declared his "spiritual wife" while legally married to another, he proclaimed the artist's right to freedom in The Creative Life (1924), abandoned his editorship at The Nation, and fled to Europe. Lewisohn's fictionalized account of his failed marriage, The Case of Mr. Crump (1926), once again attacked the empty morality of this world and won Sigmund Freud's praise as the greatest psychological novel of the century.

A creator of one of Paris's leading salons, Lewisohn ended his leisurely writer's life in 1934 to awaken America to the growing Nazi threat. Poised to face the unfinished marital battle at home, but anxious to engage in the coming struggle for Jewish survival and the future of Western civilization, he set sail, unsure of what lay ahead.