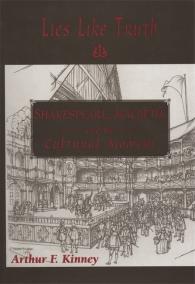 Shakespeare, Macbeth, and the Cultural Moment

Arthur's Kinney's Lies Like Truth is at once deeply learned and adventurous in its reading of Macbeth in its historical moment.

What was it like to be in the audience of the Globe Theater in 1606? By demonstrating fundamental connections between audience reaction then and the use of computers today, Renaissance scholar Arthur Kinney explores the cultural moment of one of Shakespeare's most popular tragedies.

Examining the cultural practices and beliefs that influenced Shakespeare's writing of Macbeth, Kinney reconstructs how playgoers in 1606 understood that drama when it was first presented and shows how many congruent and often conflicting perspectives played on their minds. Calling on hundreds of documents with which Shakespeare might have been familiar, he records a wide range of cultural practices related to nearly every aspect of society in that day.

Kinney proposes a new way of reading this period's texts, drawing us closer to the way dramatic plays such as Macbeth were understood from early modern times to beyond today's technological revolution. In the course of this inquiry, he seeks to determine whether the 1623 text of Macbeth that we now have is anything like the original 1606 performance.

Lies Like Truth shows that the computer revolution of our time can help us revisit Shakespeare’s works in their own time and thereby enhance our understanding of them. This provocative work unlocks a cultural moment frozen in time and broadens our appreciation of Shakespeare.

Arthur F. Kinney is the Thomas W. Copeland Professor of Literary History and Director of the Massachusetts Center for Renaissance Studies at the University of Massachusetts, Amherst.

Arthur's Kinney's Lies Like Truth is at once deeply learned and adventurous in its reading of Macbeth in its historical moment. This book enriches our understanding of Macbeth's framework of meaning while it also asks how the play makes meaning.

2 days 30 min ago
Now a National Jewish Book Award Finalist! @JewishBook https://t.co/qTKAeUEPVX
2 days 3 hours ago
RT @Steph_Steinberg: Tomorrow @ 7 p.m.! Join me and @DETWritingRoom at The Whitney for our first #2023AuthorSeries event ft. @waynestate… https://t.co/pssbi2NLNs
6 days 5 hours ago
SAVE THE DATE! Join author Desiree Cooper and illustrator Bec Sloane this Saturday for a behind the scenes look at… https://t.co/cKDBmbewOa