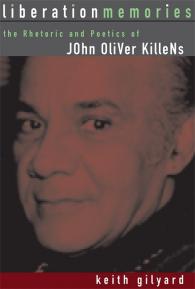 The Rhetoric and Poetics of John Oliver Killens

Keith Gilyard's thoughtful and informed study is required reading for anyone who wants to understand the vibrant, controversial-and often deliberately misinterpreted-Black Arts Movement.

No serious history of the development of the African American novel from the 1950s onward can be written without reference to John Oliver Killens. A two-time nominee for the Pulitzer Prize and founding chairman of the legendary Harlem Writers Guild, Killens was regarded by many as a spiritual father who inspired a generation of African American novelists with his politically charged works. And yet today he rarely receives proper critical attention. Seeking to strengthen our understanding of this important literary figure, Keith Gilyard departs from standard critical frameworks to reveal Killens’s novels as artful renderings of rich African American rhetorical forms and verbal traditions.

Gilyard finds that many critics, adhering to ideals of art for art’s sake or narrative conciseness, are ill-equipped to appreciate the many ways in which Killens’s fiction succeeds. Rejecting the "pure art" position, Killens sought to articulate Black heroism particularly within a family or community context, offering a set of values he deemed liberatory. He focused on rendering noble and polemical characters, and his work represents a distinguished fusion of sociopolitical persuasion (rhetoric) and literary artifact (poetics).

To help illuminate such novels as Youngblood (1954), And Then We Heard the Thunder (1962), and The Cotillion (1971), Gilyard examines Killens’s work as an essayist and cultural organizer, highlighting his activism. His life and literary production can be partly characterized, Gilyard suggests, by the African American jeremiad—a major rhetorical form in the Black intellectual tradition expressing faith that America’s destiny is to become an authentic, pluralistic democracy.

Keith Gilyard is a professor of English at Pennsylvania State University.

No serious study of the African-American novel from the 1950s to date can skip a reference to John Oliver Killens. Liberation Memories by Keith Gilyard examines Killens's work as as essayist and cultural organizer, highlighting his activism. Gilyard doesn't use standard critical frameworks to reveal Killens's novels as artful renderings of rich African-American rhetorical forms and verbal traditions. A two-time nominee for the Pulitzer Prize and founding chairman of the legendary Harlem Wtiers Guild, Killens was regarded by many as the spiritual father who inspired a genre of African-American novels with his politcally charged works.

This excellent and long overdue introduction to the work of an important writer and literary activist allows us to carefully reevaluate John Oliver Killens's place in the history of postwar American and African American literature. Keith Gilyard's thoughtful and informed study is required reading for anyone who wants to understand the vibrant, controversial-and often deliberately misinterpreted-Black Arts Movement.

Gilyard's holistic approach to Killens--as novelist, essayist, teacher, sociopolitical activist and organizer of literary conferences--posits him as heir to the likes of Frederick Douglas and W. E. B. Du Bois, for the latter's insistence on the compatibility of aesthetics and propaganda in particular. Gilard underscores the literary distinction and integrity Killens achieves through a deft, at times unique adaptation of African American vernacular art forms and modes of expression to the aesthetic uses of his fiction.

17 hours 23 min ago
Wayne State University Press is proud to announce our winner and finalists of the 2022 Next Generation Indie Book A… https://t.co/Ozy1WEQY1i
1 day 22 hours ago
Congratulations to all of the winners! https://t.co/Em8m5qoESk https://t.co/0EX9yD1vge
2 days 22 hours ago
RT @muckrack: Today's featured journalist is @fkwang, Communities Correspondent at @NewsHour. Based in Detroit, Frances covers As… https://t.co/XK9qCAOXhS