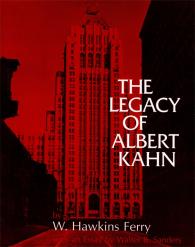 The Legacy of Albert Kahn

W. Hawkins Ferry
With an Essay by Walter B. Sanders

The Legacy of Albert Kahn salutes the achievements of one of America's most distinguished architects. Originally the catalog for a major retrospective exhibition at the Detroit Institute of Arts, this volume has become an invaluable handbook in tracing the creative genius of Albert Kahn.
Known principally for his development of modern industrial architecture, Kahn also made significant contributions in the areas of commercial, civic, institutional, and domestic architecture. Dividing the early and late works, each chapter is a chronological presentation of designs within a given architectural category. Black-and-white photographs and illustrations abound.
Eclectic and visionary, the man whose legacy included the General Motors and Fisher Buildings, the Rouge Plant, and a considerable number of buildings on the University of Michigan's Ann Arbor campus continues to be a source of inspiration for a new generation of architects.

W. Hawkins Ferry is best-known for his book The Buildings of Detroit and was an important cultural influencer of Detroit his entire life.