Home » Books » From Left to Right 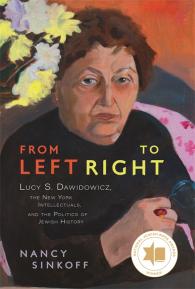 From Left to Right: Lucy S. Dawidowicz, the New York Intellectuals, and the Politics of Jewish History is the first comprehensive biography of Dawidowicz (1915–1990), a pioneer historian in the field that is now called Holocaust studies. Dawidowicz was a household name in the postwar years, not only because of her scholarship but also due to her political views. Dawidowicz, like many other New York intellectuals, was a youthful communist, became an FDR democrat midcentury, and later championed neoconservatism. Nancy Sinkoff argues that Dawidowicz’s rightward shift emerged out of living in prewar Poland, watching the Holocaust unfold from New York City, and working with displaced persons in postwar Germany. Based on over forty-five archival collections, From Left to Right chronicles Dawidowicz’s life as a window into the major events and issues of twentieth-century Jewish life.

Nancy Sinkoff is the academic director of the Allen and Joan Bildner Center for the Study of Jewish Life and professor of Jewish studies and history at Rutgers University–New Brunswick. She is author of Out of the Shtetl: Making Jews Modern in the Polish Borderlands, of "Yidishkayt and the Making of Lucy S. Dawidowicz" the introductory essay to Dawidowicz’s reissued From that Place and Time, A Memoir, 1938–1947, and co-editor with Rebecca Cypess of Sara Levy’s World: Gender, Judaism, and the Bach Tradition in Enlightenment Berlin.

Lucy Dawidowicz comes alive again with her wisdom and insight, her prescience and unflinching honesty (and her sometimes orneriness). This prodigiously researched book takes readers deep inside the world that shaped Dawidowicz and that she documented with passion and courage.

– Francine Klagsbrun, author of Lioness: Golda Meir and the Nation of Israel

With this book, Lucy Dawidowicz has found her biographer. But even beyond that important contribution, Nancy Sinkoff offers profound insight into the American Jewish psyche, chronicling its diverse cultural proclivities and political sensibilities. With literary elegance and masterful command of her sources, Sinkoff uses Dawidowicz to tell a larger story: the rise of Jewish political conservatism as a powerful force in American life from its roots in Yiddish progressive circles in New York. An outstanding achievement by a first-rate historian.

In this masterful biography of a pioneering scholar-intellectual, Sinkoff reveals precisely how American Jewish politics came to be bound by the golden chains of memory and trauma to the vanished world of pre-Holocaust Eastern Europe. In the process, she sets a new standard for American Jewish political history.

Lucy Dawidowicz’s life and career encapsulates much of the Jewish experience since the time of World War II. She was in Poland immediately before the war, in Germany right after the war, and at the heart of the political debate that would roil and continues to roil the American Jewish community over the past seventy years. Often ignored by historians because she was a woman, Dawidowicz regains her rightful place in the annals of American Jewish history thanks to this compelling and meticulously researched biography by Nancy Sinkoff.

I never quite knew how to approach Dawidowicz’s legacy. She was a bold female voice who rejected the "special pleading" of second-wave feminism. She dedicated herself to Yiddish but rejected it as a basis for Jewish life. She was a frustrating, consternating figure for me, a political thinker who, along with her better known male peers, had journeyed from far left in the 1930s to neoconservative in the 1980s. As I saw it, we had so much, and so little in common. From Left to Right affirms my impression of a woman of fierce intellect and principle, a woman of her many times and places.

It is customary in a book review, especially a positive book review, to ferret out something that one does not like and expand on it. Normally I would obey this code, but it isn’t easy because I honestly liked everything about Nancy Sinkoff ’s biography. It is well written and informative about an important person and her growth and development and place in Jewish letters. It brings attention to a neglected and fascinating New York intellectual who went from left to right and stayed there, never seeing the need to apologize for her move. It has interesting new archival material and photographs. It has interesting letter exchanges with notable figures, among them Albert Einstein, Simon Wiesenthal, and Noam Chomsky. What’s not to like?

Alert to her driving obligations to both the European past and American present, Lucy Dawidowicz once said she felt "somehow pulled between two poles, never quite at home in either, and above all not wishing to be." Thirty years after her death in 1990, Ms. Sinkoff’s rewarding reappraisal, a model of biographical clarity, at last brings a formidable practitioner of the historian’s craft home and gives her the attention commensurate with her irrefutable influence.

Sinkoff's biography of Lucy Schildkret Dawidowicz succeeds on every level. It is informative as well as engaging reading and her treatment of its subjects is even-handed.

– Kevin Alan Brook, author of The Jews of Khazaria

Sinkoff’s engaging and revelatory biography is a reminder of Lucy Dawidowicz’s important place among 20th-century American intellectuals. She may have been forgotten by intellectual historians, but her works should, and hopefully will, continue to find their place on the shelves of those who care for the truths of the Jewish past and who want to strengthen the prospects of the Jewish future.

From Left to Right is a lucid study that is aimed at scholars and general readers alike. As a bonus, its extensive appendix includes correspondence to and from Dawidowicz, enabling readers to sample her "distinctive personal voice." Highly recommended.

Sinkoff has given [Dawidowicz's] entire life's work now, for the first time, the attention it deserves.

A strength of this book is that it not only traces the personal journey of its biographical subject but also fills in the background of her mentors, her fellow travelers, and the organizational cultures in which she worked. As one who lived through a good part of the era described, I felt reminded, almost viscerally, of the tenor of those times. And so many of the issues that Dawidowicz addressed—such as the relationship between diaspora Jewry and Israel and American Jewry’s love-hate relationship with the evangelicals—are still very much with us

We are in Sinkoff’s debt for bringing this remarkable Jewish historian’s intellectual and political journey to center stage.

Sinkoff navigates through the facts of Dawidowicz’s long and eventful life with the effortless elegance of an experienced and disciplined scholar, pointing to the most probable rationale behind the ideological twists of her protagonist, but tactfully refraining from all-too-easy opinionated valuations, overgeneralizations or moral judgments.

The key to understanding Dawidowicz, Sinkoff persuasivelyargues, is that because of these experiences, she thought of herselfas a Jew who happened to live in America, rather than anAmerican whose ancestors happened to be Jewish. Half a centuryago, this made her unclubbable among the New Yorkintellectuals. Today, in a world less enamored of universalism, itmight make her sound more like a prophet.

Nancy Sinkoff's biography is well written and an information-filled look at an important person and her growth and development and place in Jewish letters.

Along with Eli Wiesel, Dawidowicz became one of the most sought-after lecturers about the Holocaust. Despite her contribution to Holocaust historiography, she has been somewhat forgotten by the public. A very engaging read, From Left to Right manages to rescue her from oblivion.

Sinkoff's argument is convincing and she provides a nuanced biography of a previously overlooked figure. She demonstrates the importance of including women in New York intellectual and neoconservative scholarship, and successfully links the Jewish past to modern American politics. Those interested in American intellectual history and Jewish studies should read this fascinating biography.

Sinkoff’s book should serve as a template for other historians. It is written in an engaging style and will interest not only specialists but general readers as well.

Sinkoff has written a comprehensive intellectual biography of Dawidowicz that is accessible to nonexperts due to its extensive provision of historical context.

By exploring with impressive research the work of a forgotten historical
figure like Dawidowicz, Nancy Sinkoff has breathed new life into the well-trodden
subject of the New York Jewish intellectuals, while also offering a cogent critique
of American Jewish exceptionalism.

– Kirsten Fermaglich, Journal of the Association for Jewish Studies

Sinkoff’s attention to detail, mining of the primary sources, and innovative historiographic
approaches mark this book as both a standard and a classic for readers
in a number of fields. It shares important new insights just as it invites scholars to
investigate otherwise hidden figures whose stories prove critical to our understanding
of this pivotal moment in modern Jewish history.

Featured in Gazeta: A Quarterly Publication of the American Association for Polish-Jewish Studies and the Taube Foundation for Jewish Life & Culture (Spring 2020)

Featured on Museum of Jewish Heritage – A Living Memorial to the Holocaust (August 4, 2020)

Interview on the Bookmonger podcast via the National Review (March 30, 2020)

Interview on New Books in History podcast via the New Books Network (March 17, 2020)

How Do We Honor an anti-Feminist on International Women’s Day? via the American Jewish Historical Society (March 2, 2020)