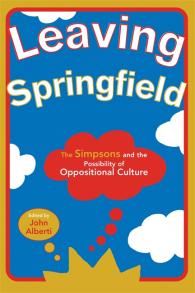 The Simpsons and the Possibility of Oppositional Culture

The book takes a scholarly yet humorous look at how The Simpsons can remain so popular and yet be countercultural at the same time.

Since its first appearance as a series of cartoon vignettes in 1987 and its debut as a weekly program in 1990, The Simpsons has had multiple, even contradictory, media identities. Although the show has featured biting political and social satire, which often proves fatal to mass public acceptance, The Simpsons entered fully into the mainstream, consistently earning high ratings from audiences and critics alike.

Leaving Springfield addresses the success of The Simpsons as a corporate-manufactured show that openly and self-reflexively parodies the very consumer capitalism it simultaneously promotes. By exploring such topics as the impact of the show’s satire on its diverse viewing public and the position of The Simpsons in sitcom and television animation history, the commentators develop insights into the ways parody intermixes with mass media to critique post modern society.

In spite of the longevity and high cultural profile of the show, The Simpsons has so far attracted only scattered academic attention. Leaving Springfield will be of importance to both scholars of media and fans of the show interested in the function of satire in popular culture in general and television in particular.

The book takes a scholarly yet humorous look at how The Simpsons can remain so popular and yet be countercultural at the same time.

Authoritative voices speaking from various well-informed critical perspectives provide Leaving Springfield with rewards for scholars and Simpsons fans alike. Framed more coherently than most collections of television criticism, this volume makes a persuasive case for the series as an act of cultural resistance. Accessible language and detailed textual analysis lend the volume strong student appeal. Devotees will appreciate the close scrutiny of key episodes and intimate knowledge of the series that characterize these essays.

15 hours 13 min ago
Wayne State University President M. Roy Wilson with his teacher in high school. Check out this image and many more… https://t.co/W3kp1D7dFX
1 day 15 hours ago
HAPPY PUB DATE! Dan Gerber said "If you make yourself available to Cindy Hunter Morgan’s poems, they will revivif… https://t.co/L60dTqsUUj
2 days 11 hours ago
Grab your copy or e-book of @fkwang's YOU CANNOT RESIST ME WHEN MY HAIR IS IN BRAIDS today! https://t.co/htFDjNa9yj https://t.co/zHyt049441