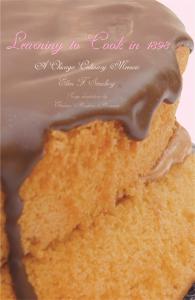 “…all readers will identify with Irma's discovery that 'baking a cake was exactly like writing a theme.'”

Learning to Cook in 1898 is more than just a cookbook or a collection of nostalgic recipes. While the volume does contain treasured family recipes, the book’s primary focus is on the efforts Irma Rosenthal Frankenstein took to educate herself about cooking, nutrition, health, and household management as a young, American-born, middle class Chicago bride of Jewish heritage at the turn of the century.

In this volume, author Ellen F. Steinberg analyzes primary material found in Irma’s "First Cook Book" and memoirs. She focuses on approximately one year in Irma’s life during which the bride-to-be collected recipes for a variety of entrees, vegetable dishes, soups, salads, tea sandwiches, baked goods, and desserts. Though many of these recipes have obvious German roots, some were clipped from local newspapers and women’s magazines, demonstrating Irma’s efforts to combine her family’s culinary traditions with modern American foodways. Eleanor Hanson, a culinary professional, worked with Steinberg to adapt more than eighty of the recipes for modern cooks.

Learning to Cook in 1898 offers insights into everyday life of the era, the sphere of women’s experience, and the customs of German and German-American communities in the Midwest. The text and recipes together will give readers interested in culinary history an opportunity not only to step back into the past but also to sample the rich tastes of those times.

Ellen F. Steinberg is an anthropological researcher and writer who was born and raised in Chicago. She is the author of two multidisciplinary works, Teach Me: An Ethnography of Adolescent Learning and Irma: A Chicago Woman’s Story, 1871–1966. She teaches as a visiting professor at local colleges, is a past president of Yonah Hadassah, and is vice president and Chicago-area chair of the Society of Woman Geographers.

Eleanor Hudera Hanson is a food consultant and founding partner of FoodWatch trend consulting company. Prior to founding FoodWatch, she worked with Kraft foods for seventeen years as manager of grocery products and later as director of Kraft Kitchens. Hanson is a member of the International Association of Culinary Professionals, the Food and Culinary Professionals section of the American Dietetics Association, and Les Dames d’Escoffier.

It is a pleasure reading the slice of history that Ellen Steinberg cuts from Chicago's culinary past and serves us in Learning to Cook in 1898. It is a well-executed balance of research and documentation seasoned perfectly by touches of Irma Rosenthal Frankenstein's life with her family and friends. I can almost taste some of the wonderful concoctions and feel the heat of the kitchen on my back.

– Michael Baskette, director of educational development and certification at the American Culinary Foundation

Not only does Ellen F. Steinberg's Learning to Cook in 1898 tell its tale in a masterful and fascinating way, it also makes it possible for the modern reader to acquire a real 'taste' of history through recipes written at the end of the nineteenth century. This is a wonderful work not to be missed by those interested in Chicago history, culinary history, and German and Jewish heritage, as well as those just interested in a fun read!

This cookbook's author, Irma Rosenthal Frankenstein, brings new meaning to the current buzzword ethnosphere when she explores the cultural web of traditional dishes and the menus of a Midwestern middle-class doctor's wife in 1898. Some readers will be tempted to recreate her recipes, which have been translated into a twenty-first-century idiom by Eleanor Hanson; but all readers will identify with Irma's discovery that 'baking a cake was exactly like writing a theme.'

– Joan Reardon, author of <i>Poet of the Appetites: The Lives and Loves of M. F. K. Fisher</i>

A prime example of culinary and social history, this wonderful book presents a picture of a lost world: German Jews in the process of assimilation in the great American city. With its very workable recipes and incisive accompanying commentary, the memoir describes a world perched at the edge of modernity, looking backward to old world foodways and forward to an industrialized food world. This is just how culinary history ought to work.

– Bruce Kraig, emeritus professor of history at Roosevelt University, Chicago, and president of the Culinary Historians of Chicago

This is much more than a cookbook. [The] story is set in a rich, cultural context with well-researched comments about the prices and availability of various foods at the time and about the kitchen impact of the growing interest in domestic science, nutrition and the burgeoning temperance and suffrage movements."

5 hours 47 min ago
HAPPY PUB DATE! Dan Gerber said "If you make yourself available to Cindy Hunter Morgan’s poems, they will revivif… https://t.co/L60dTqsUUj
1 day 1 hour ago
Grab your copy or e-book of @fkwang's YOU CANNOT RESIST ME WHEN MY HAIR IS IN BRAIDS today! https://t.co/htFDjNa9yj https://t.co/zHyt049441
4 days 4 hours ago
Wayne State University Press is proud to announce our winner and finalists of the 2022 Next Generation Indie Book A… https://t.co/Ozy1WEQY1i