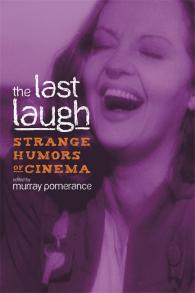 Innovative and unclassifiable. The kind of book that makes you see films you thought you knew well in new and exciting ways. Virtually every essay is a little gem.

For critics, fans, and scholars of drama and film, the laugh has traditionally been tied to comedy, indicating and expressing mirth, witty relief, joyous celebration, or arch and sarcastic parody. But strange, dark laughter that illuminates non-comedic, unfunny situations gets much less attention. In The Last Laugh: Strange Humors of Cinema, editor Murray Pomerance has assembled contributions from thirteen estimable scholars that address the strange laughter of cinema from varying intellectual perspectives and a wide range of sources.

Contributors consider unusual humors in a variety of filmic settings, from the chilling unheard laughter of silent cinema to the ribald and mortal laughter in the work of Orson Welles; the vagaries and nuances of laughter in film noir to the eccentric laughter of science fiction. Essays also look at laughter in many different applications, from the subtle, underlying wit of the thriller Don't Look Now to the deeply provocative humor of experimental film and the unpredictable, shadowy, insightful, and stunning laughter in such films as Black Swan, Henry Fool, The Treasure of the Sierra Madre, Kiss of Death, The Dark Knight, and A.I. Artificial Intelligence.

The accessibly written, unique essays in The Last Laugh bring a new understanding to the delicate balance, unsettled tensions, and fragility of human affairs depicted by strange humor in film. For scholars of film and readers who love cinema, these essays will be rich and playful inspiration.

Murray Pomerance is a Canadian film scholar, author, and professor who teaches in the Department of Sociology at Ryerson University and in the joint program in communication and culture at Ryerson University and York University. He has written extensively on film, cinematic experience, and performance. Most recently he authored The Eyes Have It: Cinema and the Reality Effect, Tomorrow, Alfred Hitchcock's America, Michelangelo Red Antonioni Blue: Eight Reflections on Cinema and Edith Valmaine and is a co-editor of Hollywood's Chosen People: The Jewish Experience in American Cinema (Wayne State University Press, 2012). Pomerance is the editor and co-editor of more than a dozen books and the editor of several book series on film at Rutgers University Press and at the State University of New York Press.

Innovative and unclassifiable. The kind of book that makes you see films you thought you knew well in new and exciting ways. Virtually every essay is a little gem with the book as a whole adding up to a veritable redefinition of film comedy.

– David M. Desser, professor emeritus at the University of Illinois

Pomerance and his contributors have compiled a solid compilation that will benefit both seasoned film scholars and those looking to gain a better understanding of the films and genres discussed in this excellent collection.

Rather than eliciting many outright chuckles, this unusual, fresh, and fascinating collection of essays grins ambivalently at the reader. . . The 13 contributors dissect a variety of strange laughter: transgressive, resigned, ironic, and pathological. Grotesque and abject Wellesian laughter roars alongside the vagaries and nuances of laughter in film noir. . . For scholars of film and readers who enjoy cinema, these essays will be playful inspiration. Summing Up: Highly recommended.