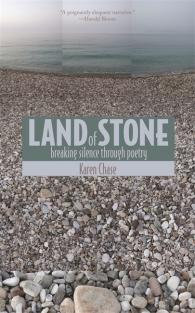 For more than a decade, Karen Chase taught poetry writing to severely incapacitated patients at a large psychiatric hospital outside of New York City. During that time, she began working with Ben, a handsome, formerly popular and athletic young man who had given up speaking and had withdrawn from social interaction. Meeting on the locked ward every week for two years, Chase and Ben passed a pad of paper back and forth, taking turns writing one line of poetry each, ultimately producing 180 poems that responded to, diverged from, and built on each other’s words. Land of Stone is Chase’s account of writing with Ben, an experience that was deeply transformative for both poet and patient.

In Chase’s engrossing narrative, readers will find inspiration in the power of writing to change and heal, as well as a compelling firsthand look at the relationship between poet and patient. As she tells of Ben’s struggle to come out of silence, Chase also recounts the issues in her own life that she confronts by writing with Ben, including her mother’s recent death and a childhood struggle with polio. Also, since poetry writing seems to reach Ben in a way that his clinical therapy cannot, Chase describes and analyzes Ben’s writing in detail to investigate the changes that appeared to be taking place in him as their work progressed. A separate section presents twenty-two poems that Chase wrote with Ben, selected to show his linguistic development over time, and a final section offers Chase’s thoughtful reflections on the creative process.

Land of Stone will provide honest and valuable insight to psychologists, psychiatrists, social workers, alternative therapists, and other mental health practitioners, and will also surely be of interest to creative writers, teachers, linguists, and anyone looking to explore the connections between language and healing.

Land of Stone is a gripping, unusual book. I will hand-sell it until the cows come home!

Karen Chase has invented a means of communication that is capable of stirring interest and communicative response even in a psychiatric patient who, for his own reasons, is determined not to be interested or responsive. The effectiveness of the quiet, elegant way, respectful of privacy, in which she invites interest and response makes the diagnostic interrogations and urgings to expression common in clinical work seem heavy-handed and primitive by comparison. In character, she does not presume to teach a lesson to clinicians, but there is one to be learned here nevertheless.

– David Shapiro, professor of psychology at the New School for Social Research, and author of Neurotic Styles

Land of Stone is hard to put down. Its message lingers long after one regretfully returns it to the shelf: In a time when we are more isolated from one another than ever, language still has the capacity to make us less alone."

The teacher is a poet who understands the depths of helplessness from battles with childhood polio. Her student is a young man sealed in a cocoon of silence by a series of traumas. In a psychiatric ward, they wrote poetry together, poet and patient, alternating with each other, one line at a time. This simple story is told with such honesty and force, chances are you will not put the book down until the last poem. Land of Stone is also a story of the many intimate roles that language plays in our lives, in the sounds and images it evokes.

Karen Chase's Land of Stone is a poignantly eloquent narrative of the therapeutic relationship between an admirably humane, gifted poet and a schizophrenic young man. No miracle takes place, nor need ensue, but both are changed somewhat for the better. Chase is restrained and persuasive in telling her story.

– Harold Bloom, literary critic and Sterling Professor of the Humanities at Yale University