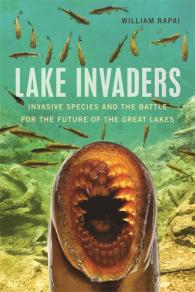 There are more than 180 exotic species in the Great Lakes. Some, such as green algae, the Asian tapeworm, and the suckermouth minnow, have had little or no impact so far. But a handful of others—sea lamprey, alewife, round goby, quagga mussel, zebra mussel, Eurasian watermilfoil, spiny water flea, and rusty crayfish—have conducted an all-out assault on the Great Lakes and are winning the battle. In Lake Invaders: Invasive Species and the Battle for the Future of the Great Lakes, William Rapai focuses on the impact of these invasives. Chapters delve into the ecological and economic damage that has occurred and is still occurring and explore educational efforts and policies designed to prevent new introductions into the Great Lakes.

Rapai begins with a brief biological and geological history of the Great Lakes. He then examines the history of the Great Lakes from a human dimension, with the construction of the Erie Canal and Welland Canal, opening the doors to an ecosystem that had previously been isolated. The seven chapters that follow each feature a different invasive species, with information about its arrival and impact, including a larger story of ballast water, control efforts, and a forward–thinking shift to prevention. Rapai includes the perspectives of the many scientists, activists, politicians, commercial fishermen, educators, and boaters he interviewed in the course of his research. The final chapter focuses on the stories of the largely unnoticed and unrecognized advocates who have committed themselves to slowing, stopping, and reversing the invasion and keeping the lakes resilient enough to absorb the inevitable attacks to come.

Rapai makes a strong case for what is at stake with the growing number of invasive species in the lakes. He examines new policies and the tradeoffs that must be weighed, and ends with an inspired call for action. Although this volume tackles complex ecological, economical, and political issues, it does so in a balanced, lively, and very accessible way. Those interested in the history and future of the Great Lakes region, invasive species, environmental policy making, and ecology will enjoy this informative and thought-provoking volume.

William Rapai is an amateur naturalist and former newspaper journalist. He is the author of the 2013 Michigan Notable Book The Kirtland’s Warbler: The Story of a Bird’s Fight Against Extinction and the People Who Saved It.

William Rapai has written an important book that I hope everyone who cares about the Great Lakes will read. It is the most meticulously researched and carefully considered study of invasive species that I’ve read, and it’s written with vitality and imagination and with an eye toward solutions. I give it my highest recommendation.

– Jerry Dennis, author of The Living Great Lakes: Searching for the Heart of the Inland Seas

Lake Invaders is deeply researched...An educational resource and fieldwork narrative, the book provides a window to what’s happening beneath the water’s surface. It uses a candid but dramatic tone to heighten the threat-appeal of each invader it profiles.

Bill Rapai's Lake Invaders is a seminal book on a profound threat to the Great Lakes. He engages the reader in the history and status of invasive species in the world's largest freshwater system. His lively prose and field interviews distinguish this book from others. You will be entertained as well as educated.

– Dave Dempsey, author of On the Brink: The Great Lakes in the 21st Century and former member of the Great Lakes Fishery Commission

The author's masterful style of writing, in which he combines engaging prose with scientific evidence, makes this book a must-read for those interested--or worried--about invasive species living in the Great Lakes.

Rapai's book is an important read for anyone living and playing on the water.

Interview: Lake Invaders: The good, the bad and the future of invasive species in the Great Lakes - MLive.com, April 21, 2016