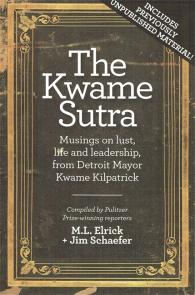 The Kwame Sutra is the definitive volume on the rise and fall of Detroit Mayor Kwame Kilpatrick, told in his own words – including many he never expected the world to see. This slim but comprehensive volume recounts Kilpatrick’s career and the text message scandal that drove him from office and is authored by the reporters who took Kilpatrick down. It includes previously unpublished text messages, comments as photos. The book uses Kilpatrick’s own words to put the truth to the many lies he told, including sections in which Kilpatrick’s public comments are juxtaposed with his contradictory private thoughts, captured in candid text messages typed by his own hands. Unlike many books that speculate on what its subject is thinking, for the first time ever the subject’s own private text messages – including many sexually-explicit missives – reveal what is on the subject’s mind. While The Kwame Sutra contains some salacious material, it is a fun but serious look back at the self-destructive career of a rising star who seemed headed for the White House, but instead ended up in the big house, sentenced to 28 years in federal prison for turning Detroit’s city hall into the hub of a vast criminal enterprise that contributed to Detroit’s status as the largest city in U.S. history to file for bankruptcy.