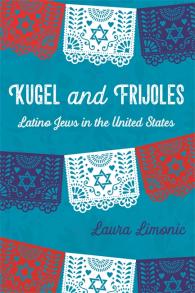 Latino Jews in the United States

Kugel and Frijoles: Latino Jews in the United States analyzes the changing construction of race and ethnicity in the United States through the lens of contemporary Jewish immigrants from Latin America. Since Latino Jews are not easily classified within the U.S. racial and ethnic schema, their ethnic identity and group affiliation challenge existing paradigms. Author Laura Limonic offers a view into the lives of this designation of Jewish immigrants, highlighting the ways in which they adopt different identities (e.g., national, religious, or panethnic) in response to different actors and situations.

Limonic begins by introducing the stories of Latino Jewish immigrants and laying out the important questions surrounding ethnic identity: How do Latino Jews identify? Can they choose their identity or is it assigned to them? How is ethnicity strategic or instrumental? These larger questions are placed within the existing scholarly literature on immigrant integration, religion, and ethnic group construction. Limonic explains how groups can be constructed when there is a lack of a perfect host group and details the ways different factors influence ethnic identity and shape membership into ethnic groups. The book concludes that group construction is never static in the United States, and, in particular, how race, religion, and class are increasingly important mediating factors in defining ethnicity and ethnic identity.

As the Latino population continues to grow in the United States, so does the influence of millions of Latinos on U.S. culture, politics, economy, and social structure. Kugel and Frijoles offers new insight with which to understand the diversity of Latinos, the incorporation of contemporary Jewish immigrants, and the effect of U.S. ethno-racial structures for immigrant assimilation.

Laura Limonic is an assistant professor of sociology at the College of Old Westbury of the State University of New York. Her research is in the area of contemporary immigration to the United States and the integration trajectories of ethnic and ethno-religious groups.

Full of rich and absorbing ethnographic material, Kugel and Frijoles provides important insights into the experiences of a fascinating immigrant group. Written in a highly readable style, the book enriches our understanding of how immigrants construct ethnic and racial identities in the U.S. today.

– Nancy Foner, co-author of Strangers No More: Immigration and the Challenges of Integration in North America and Western Europe

Limonic’s research describes Latino Jews’ interactions within the larger U.S. Jewish and Latino populations, their countries of origin, and Israel. In addition to richly documenting these communities, Kugel and Frijoles offers a suggestive model for interpreting the emergent social forms, identities, and relations that are developing in globally linked localities of the contemporary world.

Laura Limonic has written an eye-opening study of Latin American Jewish immigrants to the United States that in graceful prose comprehensively explores the complexities of ethnic and religious identity of this hybrid group that has made a virtue of its multiple attachments and cultural roots. Drawing from a rich ethnographic field study as well as her own Jewish Latina background, Limonic has given us a pathbreaking introduction to a fascinating population.

– Samuel Heilman, Distinguished Professor of Sociology and Holder of the Proshansky Chair of Jewish Studies, CUNY

Kugel and Frijoles adds a fresh and vibrant perspective to the growing body of scholarship on race, ethnicity, and contemporary American Jewish life. Limonic’s work raises important questions regarding the intersection of race, ethnicity, religion, and class during a time of rapid growth among a widely diverse Latino immigrant population to the U.S.

Quite simply, Laura Limonic owns the intersection of Jewish and Latino identities. Her book is utterly of the moment and yet also historically astute. It is an essential edition to the scholarship on an emergent part of American Jewry.

– Samuel G. Freedman, author of Breaking the Line: The Season in Black College Football That Transformed the Sport and Changed the Course of Civil Rights

I am grateful that Limonic wrote this book.

Kugel and Frijoles is replete with charts and statistical tables illuminating multiple aspects of the Latino experiences in their process of immigration and assimilation into America. This book is clearly NOT a cookbook as this reader mistakenly expected from its title. But there was no disappointment.

This is a pioneering study that opens the door to a Latinx Jewish identity that is still evolving and defining itself. Future researchers will build upon the foundation that Limonic has laid to address many other nuances of intersecting Jewish and Latinx identities in the United States, including such important topics as Ashkenazi and Sephardic differences, the role of gender and women’s position, the literary expression of identity, or even the meaning of food within this diversely Jewish and diversely Latinx community, which is hinted at by her book’s alluring title, Kugel and Frijoles. To readers seeking to understand the peculiar Jewish hybridity that emerged from the diaspora to the "other America" and that has now rerouted to the United States, Limonic’s book offers a superb guide.

Kugel and Frijoles does an admirable job linking this study to previous scholarship on Latinos in the United States, and marking, at the same time, an important milestone by opening a venue to discuss an often invisible group. The author of this intellectually sophisticated monograph of an important and timely subject cleverly intertwines theoretical points and ethnographic observations; the voices of the 86 Latin American Jewish immigrants she interviewed during her fieldwork (48 women and 38 men)—mostly from Argentina, Mexico, and Venezuela—contribute immensely to strengthen the complex tapestry presented by Limonic.

Presentation at the Center for Jewish History (September 23, 2019)