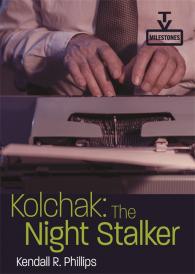 Before Buffy the Vampire Slayer or The X-Files, there was Carl Kolchak, a world-weary Chicago newspaper reporter with a cheap, seersucker suit and a penchant for uncovering monsters lurking in every corner. Kolchak first appeared on American screens in the 1972 ABC television movie The Night Stalker, which was then the most-watched television movie in history. The success of this initial offering led to a sequel, The Night Strangler, and a television series, Kolchak: The Night Stalker, that ran from 1974 until 1975. By carefully focusing on the historical and artistic contexts in which it emerged, Kendall R. Phillips offers insights into the way the series both reflected contemporary horror narratives and changed them. Ultimately, the series proved influential for later television horror shows based not only on what it did right but on the mistakes future creators would learn to avoid. The enduring impact of the series on current television horror continues to draw more and more individuals into its robust fanbase, and these fans continue to consume and create new narratives of their favorite monster-hunting reporter even fifty years after he first appeared.

Kendall R. Phillips is professor of communication and rhetorical studies at Syracuse University. He is also the author of Projected Fears: Horror Films and American Culture; Dark Directions: Romero, Craven, Carpenter, and the Modern Horror Film; A Place of Darkness: The Rhetoric of Horror in Early American Cinema; and A Cinema of Hopelessness: The Rhetoric of Rage in 21st Century Popular Culture. He holds visiting appointments at Massey University (New Zealand) and Shanghai University and serves as founding co-director for the Lender Center for Social Justice.

Phillips weaves together his authority as a leading horror scholar with his childhood love of Kolchak: The Night Stalker to produce a compelling analysis of this groundbreaking cult television classic. Positioning the show as a milestone of 1970s television and a vital forerunner to contemporary television horror, this book is a must-read for fans and scholars alike.

– Stacey Abbott, professor of film and television, University of Roehampton UK, and author of Undead Apocalypse

A fascinating and highly engaging ‘deep dive’ into the Kolchak mythos. Phillips’s analysis of the production background and cultural significance of Kolchak: The Nightstalker makes for a supremely entertaining and informative read. An important addition to the growing field of television horror studies.

With Kolchak: The Night Stalker, Kendall Phillips presents a rigorous assessment of an important television show, the impact of which is still being felt today. Phillips writes of Kolchak’s history, textual nuances, and legacy with exemplary clarity and attention to detail.

14 hours 6 min ago
HAPPY NATIONAL BOOK LOVERS DAY! In celebration of today, comment your current favorite book or something that you… https://t.co/SqfUAeiLHy
17 hours 14 sec ago
QUEERING ANTI-ZIONISM by Corinne E. Blackmer is a queer critique of anti-Zionism, exploring how the Boycott, Divest… https://t.co/jk8OUUN7ku
17 hours 3 min ago
@WSUHumClinic It was such a pleasure to have you here, Carly!