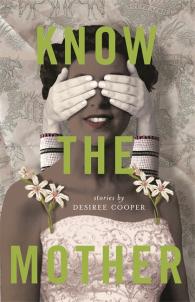 While a mother can be defined as a creator, a nurturer, a protector—at the center of each mother is an individual who is attempting to manage her own fears, desires, and responsibilities in different and sometimes unexpected ways. In Know the Mother, author Desiree Cooper explores the complex archetype of the mother in all of her incarnations. In a collage of meditative stories, women—both black and white—find themselves wedged between their own yearnings and their roles as daughters, sisters, grandmothers, and wives.

In this heart-wrenching collection, Cooper reveals that gender and race are often unanticipated interlopers in family life. An anxious mother reflects on her prenatal fantasies of suicide while waiting for her daughter to come home late one night. A lawyer miscarries during a conference call and must proceed as though nothing has happened. On a rare night out with her husband, a new mother tries convincing herself that everything is still the same. A politician’s wife’s thoughts turn to slavery as she contemplates her own escape: "Even Harriet Tubman had realized that freedom wasn’t worth the price of abandoning her family, so she’d come back home. She’d risked it all for love." With her lyrical and carefully crafted prose, Cooper’s stories provide truths without sermon and invite empathy without sentimentality.

Know the Mother explores the intersection of race and gender in vignettes that pull you in and then are gone in an instant. Readers of short fiction will appreciate this deeply felt collection.

Goodreads reviews for Know the Mother

A 2015 Kresge Artist Fellow, Desiree Cooper is a former attorney, Pulitzer Prize–nominated journalist, and Detroit community activist. Her fiction and poetry have appeared in Callaloo, Detroit Noir, Best African American Fiction 2010, and Tidal Basin Review, among other online and print publications. Cooper was a founding board member of Cave Canem, a national residency for emerging black poets, and she is a Kimbilio fellow, a national residency for African American fiction writers.

This book is a welcome reprieve from the typical whitebread 'momoir.' If those books are chardonnay, Know the Mother is bourbon.

Anxiety leaps off the first page of Know the Mother. . . . Cooper recreates the anxiety of caring for another, for having a life entrusted to you, and the brevity of the flash fiction replicates the protagonist's anxieties.

This collection make clear that to know in a mothering sense, to live the medium of the mothering body, is to experience worlds so amplified that even their briefest glimpsed stories can both terrify and beautifully overwhelm.

Know the Mother will haunt you as you applaud that fact that Cooper’s women have been given a voice, a dignity previously unseen.

Slightly longer stories, buoyed by deeper characterization and multiple scenes, are often more successful than the snapshot ones, but her sharp insight into motherhood and race makes Cooper an author to watch.

The flash fiction genre fits Cooper’s neat, abbreviated, aesthetic, and feels perfect for mothers who don’t have time for more than a morsel at each sitting, but who want to feel satisfied at the end of each selection. Each piece may hone in on a different topic—gender bias, racism, classicism—but the leitmotif remains womanhood, motherhood, family life.

Desiree Cooper’s Know the Mother is grim, but a necessary antidote to the prevailing simplistic view of motherhood. Cooper is a masterful and descriptive writer. When she describes a "big, fat baby" named Tessie in the story "To The Bone," the reader can almost touch the babe’s fat, brown, dimpled knees. The richness of her prose allows Cooper to capture life’s small moments and render a more fulsome picture of maternity. But the writer truly excels at illustrating emotion and empathy. The reader comes to know the mother by feeling what the mother feels--anxiety, despair, loneliness, irritation, love.

Taken together, Know the Mother is a welcome antidote to the fetishization of motherhood that tends to reach its
obscenely sugar-coated peak in the month of May. Because let’s face it: chocolate and flowers are a wholly inadequate
acknowledgment of the woman you are supposed to be honoring. Possibly the best gift you could give your mother
for Mother’s Day would be to read Desiree Cooper’s book yourself.

In her flash fictions, Cooper gives just enough detail in each sliver of intersecting lives to convey powerful messages about society at large. . . . Alternating between moments of levity and darkness, the vignettes in Know the Mother reveal that the only thing lurking in the shadows is some aspect of humanity...either our own demons or someone else's, acting as a mirror for some part of us we have yet to recognize.

Every once in a while you read a book and it blows you away. KNOW THE MOTHER was that for me.

– Marianne Williamson, internationally acclaimed spiritual teacher and author of A Return to Love: Reflections on the Principles of a Course in Miracles

This book is a welcome reprieve from the typical whitebread 'momoir.' If those books are chardonnay, Know the Mother is bourbon.

Know the Mother is profoundly respectful of all the parents who want to control their own narrative, who understand that they do not cease being themselves just because they belong to another in some way.

Desiree Cooper's Know the Mother is one of the most singularly focused short story collections I've encountered that wasn't really a novel-in-stories, or a collection of stories about a specific character or entity.

It’s tempting to compare the book to a box of assorted, bitter chocolates, quick bites of lyrical, truth-telling about motherhood moments, so different from the typical "momoir" fare about minivans, playdates, boredom, and wine that was all the rage in the 2000s.

The stories within the book explore gender and race and many other topics that have touched her life in some way. And not all of them are heartwarming, but rather, the truth.

The stories in Know the Mother are like jewels—glittering, finely wrought and worthy of careful appraisal. Here is fiction that examines not only the everyday messiness of living but the painful miracle of birth and the beautiful mystery of death with equal insight. Cooper's elegant, wise, and energetic collection is about what it means to be a woman, a mother, a sister, a wife, a child, and most of all, human.

Desiree Cooper's Know the Mother is a collection of thirty vignettes that examine how migrations changed the fabric of families and particularly motherhood. Young women had to make their own way – to forge for themselves the demarcation between home and the outside world, what was expected of them, and what goals they had to live up to. Motherhood was no longer cast in the direct shadow of grandmothers, and mothers-in-law, but rather shaped by the social and cultural biases of racism and sexism through which they navigated, seemingly alone. If motherhood was the icing on the cake, she held together what was under that icing. Should the mother remain unchanged, a fixer or a giver commanded merely by her role?

Each one of these short, short stories is as full of excitement, triumphs, and losses as a movie or novel but as easy to swallow and as satisfying as bonbons. A perfect bedtime accompaniment, Know the Mother is a great gift for friends. Cooper shines a brilliant light on the everyday, on the little things as real, and as unexpected, as the opening of our hearts.

– Toi Derricotte, author of The Undertaker's Daughter and recipient of a Guggenheim and two National Endowment for the Arts fellowships. She is also a chancellor of the Academy of American poets, and the co-founder of Cave Canem, a home for black poetry

I cannot name a favorite story because each one emits emotions that put me squarely into the main characters' shoes... Cooper creates complex and real characters with few words because her writing is splendid, moving, and true.

Thank you for these refreshing takes on short stories. They felt like highly focused snapshots and glimpses into many of the key moments that define and refine motherhood, every day, every phase. I saw myself and the host of feelings -- anxieties, regrets, joys, fears, anticipations -- I've experienced as a mother so far, in all of these stories.

Are short stories your thing? Consider Desiree Cooper’s collection of taut flash fiction, Know the Mother. A journalist by training, Cooper efficiently delivers all that’s needed to move a reader.

– Camille T. Dungy, author of Guidebook to Relative Strangers: Journeys into Race, Motherhood, and History, which is a finalist for the National Book Critics Circle (taken from Goodreads)

I often use the stories from [Know the Mother] when I teach because [Cooper] can pack so much emotion and nuance into a small amount of space.

Cooper's stories jump off directly in the midst of secret, highly fraught emotions, capturing snapshots that radiate love, intimacy, fear and loss. "Know the Mother" is a series of 30 gut-punches - brief, ruthlessly effective and hitting the reader directly in the vitals.

There are so many strong moments in this book, but "Soft Landing" is one I find especially worth sharing when it comes to teaching writing, because it answers a lot of the following frequently asked questions: Can I write flash fiction or flash nonfiction in segments or a series? Can flash form writing use elements of magical realism? Is it "cheating" to use a dream in a story or piece of memoir?

Make no mistake: This is not a collection of stories in which to seek solace. There is no mother’s comforting touch. Instead, there is the harsh but refreshing reality of motherhood in all of its complexity, rendered through portraits of women in moments of both pain and strength. Each story offers a beautiful, if brief, look into these women’s lives, and just as we begin to understand the inner workings of each character, we are spirited away to the next tale. Cooper’s collection teaches just how difficult it is to ever completely know the mother and even for the mother to completely understand her own identity. As Cooper writes of one character grappling with new motherhood, She marveled at how she had arrived at the other end of childbirth a stranger even to herself.

Reading this collection of flash-fiction was a visceral experience. Cooper has achieved genius in the seemingly-irrational duality of the genre’s structure: to hold moments so bright and full they feel impossible to grasp. This dichotomy is echoed in her subject and style. She perfectly encapsulates scenes—some heartbreakingly realistic (p. 27), some eerily dreamy (p. 77)—that embody the uncontainable nature and lives of women. Each story feels complete, yet, they could also be the flash-point of an entire novel. An astounding read!

Know the Mother is refreshing in its honesty and boldness, venturing into the crevices and corners of motherhood and womanhood to places that aren’t always pleasant, but are natural and inevitable. Cooper has mastered the compressed form of flash fiction, delivering vignettes that pull you in, surprise you, and then let you go on one level—but keep you meditating on them at another, as the layers of meaning peel away one by one.

Few writers have mastered the art of "flash fiction" better than Desiree Cooper. Every one of the 30 short short stories in this collection is a potent snapshot of a character or a relationship. Cooper reminds us that, as dominating as the role of a mother is in her family’s life, a woman with her own interests and needs lives inside her, too. In just a few pages, Cooper is able to suggest a novel’s worth of connections and import. And her writing is beautiful.

Goodreads reviews for Know the Mother