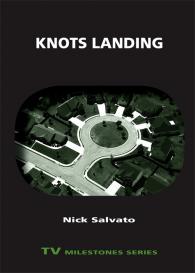 Airing on CBS for fourteen seasons (1979–93), Knots Landing was a spinoff of the popular drama Dallas, but ultimately ran longer and took a very different tone on domestic, social, and economic issues than its predecssor. In the first full-length scholarly study of Knots Landing, Nick Salvato situates the series in its economic and industrial contexts, addresses its surprisingly progressive relationship to the American politics of its period, offers close formal interpretations of noteworthy episodes, and unpacks the pleasures of the program’s sensuous surfaces.

While it has been largely overlooked in studies of 1980s television, Knots Landing nonetheless beat more masculine fare like Hill Street Blues and L.A. Law in the ratings, introduced a novel focus on middle-class lives in melodrama, and launched or revived the careers of its major stars. In this study Salvato investigates the series’ place in widespread serialization of American primetime television in the early 1980s and the end of network dominance in the early 1990s, along with its unique relationship to Reaganism and glamour, on the one hand, and everydayness and suburbanization, on the other. Salvato also looks at the series in relation to key concepts such as memory, theatricality, identification, "quality" TV, and stardom.

Fans of the series as well as readers interested in popular culture, television history, representations of gender, and constructions of celebrity will find much to enjoy in this volume.

Nick Salvato is associate professor of performing and media arts at Cornell University. He is also the author of Uncloseting Drama: American Modernism and Queer Performance.

Thoroughly knowledgeable about this long-running series, from its production history to its cast of characters, Nick Salvato has written a book grounded in careful viewing and a model of ingenious and incisive thinking about popular culture. Fans of Knots Landing (but not only fans) will be delighted with the result.

17 hours 19 min ago
Hey #movementdetroit fans! WSUPress's TECHNO REBELS is a great way to relive the excitement of @MovementDetroit all… https://t.co/f4nPn8uYj0
1 day 17 hours ago
Check out Cindy Hunter Morgan's new book at https://t.co/o1mzeoKv1M https://t.co/6W9FLg0RLa
2 days 20 hours ago
Wayne State University President M. Roy Wilson with his teacher in high school. Check out this image and many more… https://t.co/W3kp1D7dFX