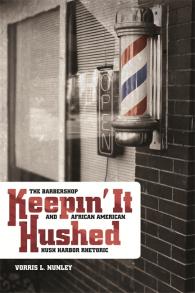 Vorris Nunley has emerged as one of the most insightful and creative African American cultural theorists since the 1970s… Keepin' It Hushed is a treasure.

In Keepin’ It Hushed: The Barbershop and African American Hush Harbor Rhetoric, Vorris L. Nunley investigates the role of the hush harbor (a safe place for free expression among African American speakers) as a productive space of rhetorical tradition and knowledge generation. Nunley identifies the barbershop as an important hush harbor for black males in particular and traces the powerful cultural trope and its hidden tradition of African American knowledge through multiple texts. From Dunbar’s "We Wear the Mask" to the recent Barbershop movies and the provocative rhetoric of Reverend Jeremiah Wright, Nunley’s study touches on a range of time periods and genres.

Nunley’s introduction connects African American Hush Harbor Rhetoric (AAHHR) to everyday considerations of what may or may not be spoken in public and how African American speakers manage numerous hidden transcripts. In the first three chapters, Nunley charts different iterations of hush harbors and their function in the context of residual and emergent rhetorical traditions. He investigates public sphere theory and its application (and misapplication) to black civil society and hush harbors and connects AAHHR to nommo, the power of the word. In chapters 4 and 5, Nunley examines the ubiquity of the hush harbor trope in African American culture and considers barbershops as pedagogical sites, using literature, poetry, philosophy, and film to make his case. In chapter 6, he analyzes the Barbershop movie in detail, arguing that the movie’s commodified, neoliberal version of AAHHR did not represent a hush harbor, although that was ostensibly the aim.

Keepin’ It Hushed concludes with a presentation of a hush harbor pedagogy in chapter 7 and a distinctive analysis of hush harbor oriented speeches by then-Senator Obama and Rev. Jeremiah Wright. Rhetoricians and readers interested in African American life and culture will appreciate the cogent analysis in Nunley’s volume.

Vorris L. Nunley is professor of English and rhetoric at the University of California, Riverside and co-editor of Rhetoric and Ethnicity.

Keepin' it Hushed is immensely valuable for how it pursues a nonhierarchical trajectory of cultural production and generalized knowledge making. Keepin' it Hushed not only disrupts the philosophical basis for neoliberal notions of social decorum, but also assembles a Black ontology as a proper home for the Rhetorical tradition.

Thoughtfully and masterfully marshalling critical theory, philosophy, cultural studies, rhetorical theory, as well as insights from popular culture, literature, neoliberal theory, feminist geography, President Obama's 'Race Speech,' and much more, Nunley lays bare African American hush harbor rhetoric as a site of knowledge production that validates Black experience and human social value. In the end, he argues that in order for America to reach a more substantial democratic potential, these subjugated discourse and rhetorical practices must become part of the conversation in general rhetorical nomenclature and in the American political public sphere."

– Elaine Richardson, professor of literacy studies at the Ohio State University and author of the forthcoming educational memoir PGD to PhD: Po Girl on Dope to PhD

Vorris Nunley has emerged as one of the most insightful and creative African American cultural theorists since the 1970s. His explorations of the fiction of John Oliver Killens, Leon Forrest, and Richard Wright; analyses of a range of African American poetry; mining of Lonne Elder's dramatic gestures; deft critical handling of movies such as Barbershop; and framing of the Obama-Wright dialectic against the national gaze all reveal marvelous perceptive powers. Keepin' It Hushed is a treasure."

A deftly orchestrated piece of rhetoric in its own right, Keepin' It Hushed riffs from classical philosophy and rhetoric to a sampling of pop culture genres, from canonical to non-canonical literature of the Western, African, and African American traditions. Few writers are able to balance the craft of writing with a comprehensive treatment of ideas the way Nunley does."