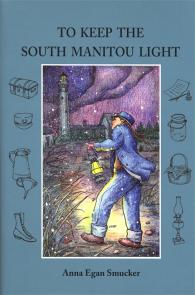 To Keep the South Manitou Light

An interesting and well-written addition to the historical literature genre for young readers.

Set on South Manitou Island in Lake Michigan during the fall of 1871, To Keep the South Manitou Light tells the fictional tale of a twelve-year-old girl named Jessie, whose family has been taking care of the lighthouse on the island for generations. Jessie’s mother has kept the light by herself since Jessie’s grandfather died of a heart attack ten days before the story begins. Afraid her family will lose the lighthouse, Jessie decides not to mail her mother’s letter informing the Lighthouse Service of her grandfather’s death and instead puts it in one of her mother’s canning jars and tosses it into the lake. Later, as a fierce November ice storm hits the island, the repercussions of this action will not only teach Jessie about honor and responsibility but will also give her hard-earned insight into what it means to be brave. Written for children between the ages of 8 and 12, To Keep the South Manitou Light provides regional history along with everyday lessons, all while engrossing young readers in an exciting story.

Anna Egan Smucker is the author of Outside the Window (Knopf, 1994) and No Star Nights (Knopf, 1989), which won the 1990 International Reading Association Children’s Book Award in the Younger Reader category. In addition to her writing, she gives author presentations and conducts writing workshops throughout the country.

For the older kids, Anna Egan Smucker has written a wonderful historical novel set on South Manitou Island during the fall of 1871. Rich in historical detail, Smucker's painstakingly researched book would be a great read-aloud experience in the classroom as well as in the kid's room. Check out the author's notes in the back since they explain how the research was done and outline the historical context of her characters, they are equally as fascinating.

To Keep the South Manitou Light is an exciting, well-paced narrative that captures the era as well as the continuing allure of Michigan's Leelanau Peninsula. An interesting and well-written addition to the historical literature genre for young readers."

– Laurie Lanzen Harris, editor and publisher of Biography for Beginners